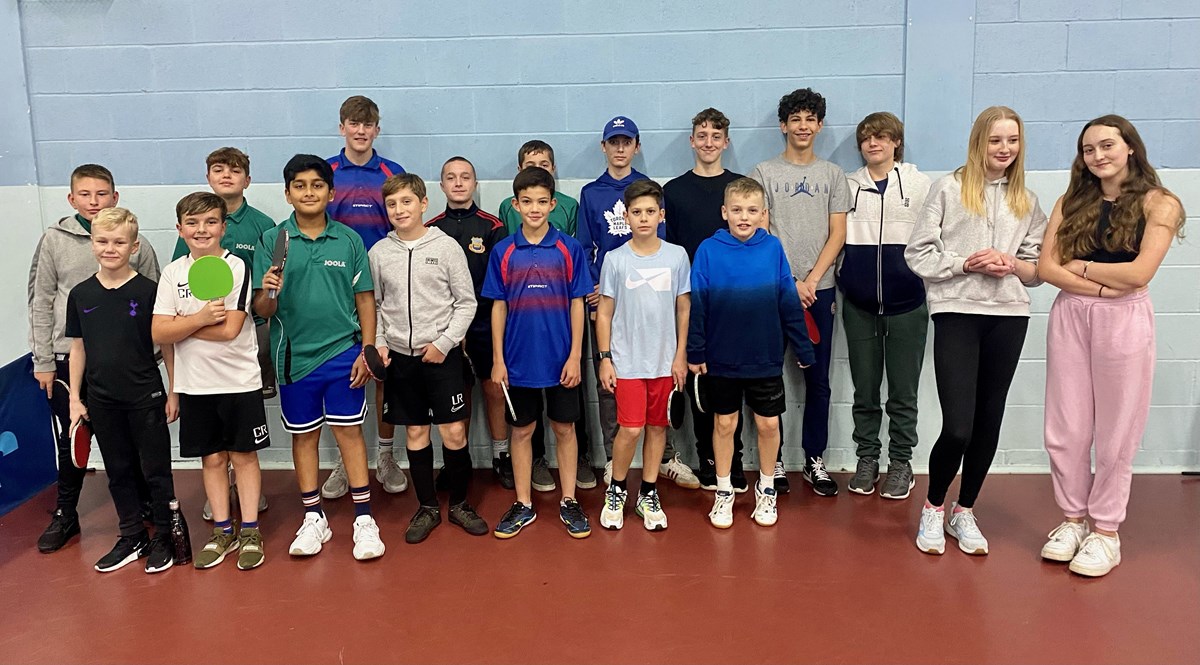 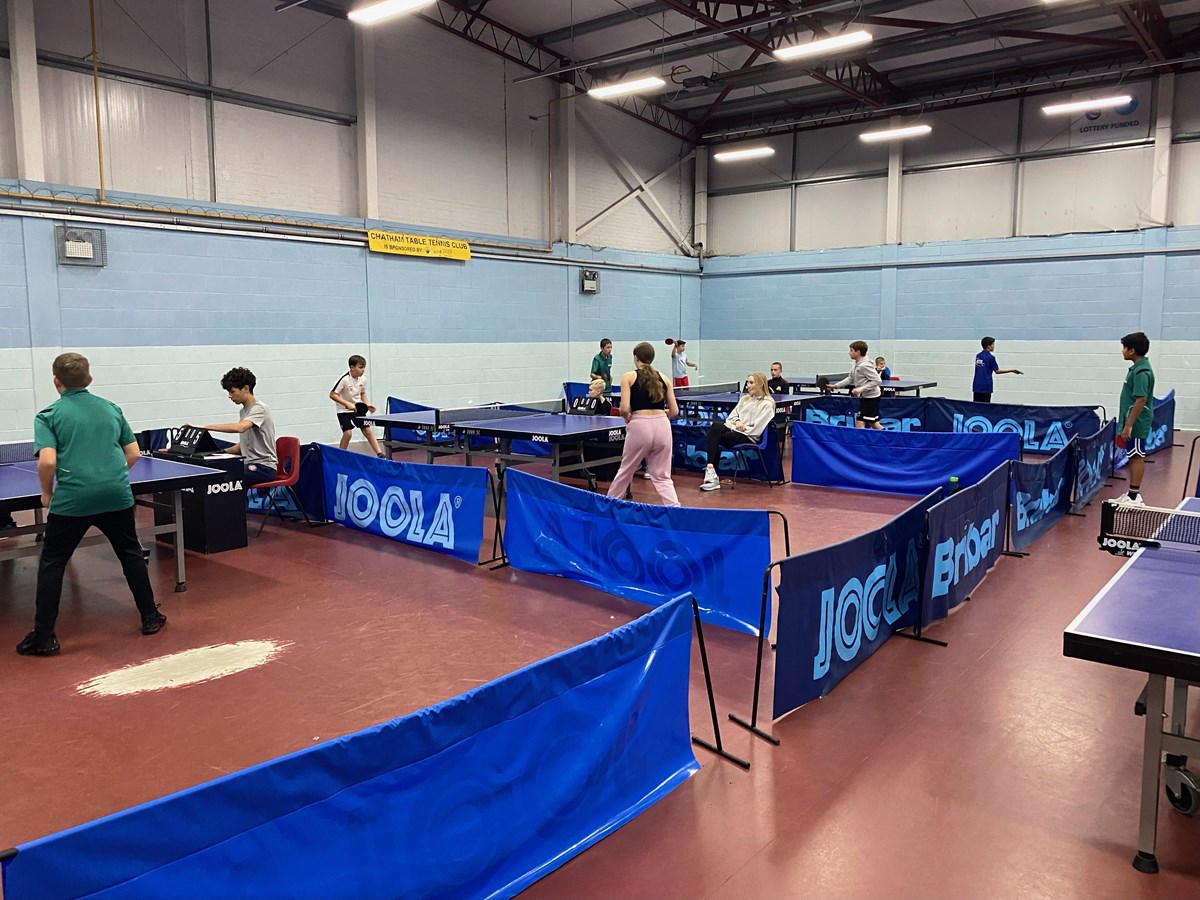 Second placed Burritos overcame Dynamic Duo but the star of the match was Robert Coe beating both Kieran and Aiden (for the first time) who are both several years older with National Junior League experience. Liam struggled against the same opponents.

Nachos confirmed the title with great victory against runners up Burritos. Maxwell Antrim was the only player to go the whole season undefeated with Daniel Gubala (who was slightly below his best) only losing to Kieran. Aiden and Kieran played a great doubles to take another point off the champions 12-10 in the final leg. These were the only points dropped by the dominant Nacho team.

Robert Coe lead the way with a 4-1 win over George and Adam. George Gee showed how much he has improved with his great win over the defensive skills of Liam.

George showed what a great night he was having with two wins against Da Bruvs. Jack and Elijah were still able to defeat Adam and combine to do the same in the doubles.

Henry Cronin won both his games without dropping a leg against Joseph and Samuel. Harrison came in with Henry against his team-mates but was unable to add to their two points.

Luca and Joe ensured they finished in third place in the league with a convincing victory over bottom of the table Unstopaballs. Credit goes to William and Owen for their enthusiasm and commitment to the league even when the results went against them.

Player of the Week - ROBERT COE

Player of the Season - MAXWELL ANTRIM

Burritos just managed to beat Eagles with Joe Weatherhead with a great win against Aiden Craddock to keep the scoreline close. Aiden and man of the match Kieran Robertson just did enough to prevent Eagles from challenging them in the league table and keep them in second place.

Aiden and Kieran easily overcame Jack and Elijah without their opponents winning a leg in the singles. Aiden was unable to play in the doubles giving Da Bruvs their point.

Nachos showed their skills in defeating third placed Eagles with the only leg dropped from Daniel Gubala against the improving Joe Weatherhead. Both Max Antrim and Daniel still remain unbeaten with only one week remaining.

This was the closest match of the week with Henry Cronin gaining the Sharks two points. There was two five leg games with Henry overcoming George Gee and Adam Markham doing the same against Lucas O’Sullivan.

Robert and Liam repeated the scoreline against Owen Pearce and William Scott as was expected. These 10 points have helped the Dynamic Duo’s surge up the league into fourth place.

Player of the Week - KIERAN ROBERTSON

Only two matches were played this week again this time because of the school half term holiday. These were the four bottom teams so it was very competitive. The matches produced two very close matches with 3-2 victories for Bat out of Hell over Balls of Fury and Da Bruvs over Unstopaballs. George Gee was undefeated for Bat out if Hell and Ollie Curtis won both his singles making his debut for the Unstopaballs.

Next week we have 6 matches to catch up a couple if postponements.

Players of the Week - GEORGE GEE and OLLIE CURTIS

Only two matches were played this week because of player unavailability with comfortable 5-0 victories for Nachos over Da Bruvs and Sharks over the Unstopaballs. Max and Danny won games for the league leaders Nachos with Henry and Lucas matching their feat for the Sharks.

Next week their are no matches because the School has an event on. But we start again on 17th February.

Player of the Week - MAXWELL ANTRIM and DANIEL GUBALA (Will they stay unbeaten all season?)

Even though Balls of  Fury convincingly beat Unstopaballs the hero of the night was Owen Pearce with an amazing win over Samuel to give the young smiley team their first point of the Season. Sam won his other game against William, with  Joseph was unbeaten in both his singles and the doubles. Well done Unstopaballs and especially Owen!

The scoreline here did not reflect how well Jack and Elijah played against one if the best teams in the League. There was some excellent games and they should be pleased with their performances. The Eagles still have an outside chance of the title although they still have to play the two favourite teams (Nachos and Burritos). Joe still remains unbeaten and was well supported by young Luca.

Nachos negotiated a potentially tricky match against the fast improving Dynamic Duo team. Max win his games easily enough but Daniel only just defeated Robert in the deciding leg. Liam showed remarkable defensive qualities but to no avail against the attacking strength of Max and Daniel.

Aiden and Kieran showed their extra experience in their victory over Henry and Lucas in a fairly one sided contest. The youngsters will learn lots from this match which will stand them in good stead for the future.

Player of the Week - OWEN PEARCE for a win nobody predicted.

Bat out of Hell 5 v Unstopaballs 0

George and Adam gained their first victory of the Season against the young Unstopaballs team of William and Owen. The winners would have been helped by both having played in the Kent Schools U13 Competition the day before.

Kieran and Aiden from Burritos easily beat the Balls of Fury team of Joseph and Samuel. Hoping that Kieran and Aiden can achieve the same level of success in the National Junior League in Tunbridge Wells this Saturday, along with Daniel.

Sharks (or Charlton!) found the going tough against one of the favourites Nachos. Daniel and Max showed all their experience defeating the younger Henry and Lucas. It does not get any easier for them next week when they play the unbeaten Burritos team.

in the best match of the evening the Eagles bounced back from their unfortunate loss last week to defeat the previous unbeaten Dynamic Duo. Joe Weatherhead showed his great potential defeating the very good Liam and Robert. He was ably supported by Luca beating Liam in a close game. Robert managed to win the battle of the top primary school players in this area to secure the Dynamic Duo’s point.

Player of the Week - JOE WEATHERHEAD

Congratulations to 10 players from the league who competed in the Kent Schools U13 event on Wednesday. They all played great against the best of their age group in the county.  Daniel Gubala (even with a shoulder injury) was runner-up, Kieran Robertson third and Aiden Craddock  fourth. Joseph Spratling was third in the Consolation event with Joe Weatherhead fourth.

Burritos 5 v Bat out of Hell 0

Aiden and Kieran made light work with a straightforward win over Adam and George. Having played longer and a year older made all the difference although George can be really pleased winning a leg against Aiden. Having played the two favourites Burritos and Nachos, Bat out of Hell will have easier matches for the remainder of the season.

Surprise package Robert Coe and Liam Gulliver kept up their 100% record in defeating Jack and Elijah. Robert Coe the Kent Schools U11 champion is making huge progress and only dropped 17 points in his two singles games combined against much older opposition. The closest game of the evening was a deciding 11-7 win for the defensive play of Liam over the attacking play of Jack.

Nachos remain unbeaten with another convincing victory over Balls of Fury. Max and Danny G beat Harrison and Samuel without dropping a leg in the process. They are top of the league but have played a match more than Burrios and Dynamic Duo chasing them. The top three are still to play each other which will decide where the title goes.

The closest match of the evening saw Sharks beat the unbeaten Eagles. They were helped by Luca injuring his arm in a close loss to Henry Cronin. Luca could not play his other singles or take part in the doubles handing over those two points. Joe Weatherhead however showed what an amazing player he is by winning both his singles to keep the scoreline respectable.

Player of the Week - ROBERT COE

Unstopaballs will be happy not to play another food named team losing convincingly to the strong Burrito’s playing their first match if the season. Kieran Robertson and Aiden Craddock both play National Junior League and easily beat the young beginners Owen and William.

Nachos showed their class defeating Bat out if Hell by the maximum scoreline. Max and Danny G used their experience and spin skills to great effect to continue their unbeaten start still without  dropping a leg.

Eagles continued their unbeaten start with a competitive match against the Balls of Fury. Lucas struggling with a footballing hamstring injury lost the first leg but turned things around to win against Joseph. Partner Joe was able to defeat both Joseph and Harrison although there was a number if very close leg scores.

Da Bruvs again were involved in the closest match if the night snd again agonisingly just lost right at the end. Star performer was young Henry Cronnin winning both his singles, with Lucas adding a win against Elijah. Jack Wren won his first game of the season against Lucas and combined with Elijah to keep their doubles record intact. Victory was secured by Henry in the last singles against Elijah winning the last two legs 11-9.

Player of the Week - HENRY CRONIN

Comfotable victory for Eagles with a strong team of Luca Romagnuolo and Joe Weatherhead in great form. Adam and Samuel Markham will have better matches.

Kent Schools U11 champion Robert Coe and partner Liam Gulliver showed all their skills to beat Lucas  O’Sullivan and Henry Cronin. Henry is the youngest player in the league but showed what a great player he soon will become and start beating his dad!

Nachos one of the favourites to win the league easily defeated Unstopaballs who could only muster 30 points in the evening. This is not surprising with the gulf in age and experience of Danny Gubala and Max Antrim. Owen Pearce and William Scott will have easier players to face but they smiled and lit up the room with their exuberance.

In the closest contest of the evening Balls of Fury (Harrison Pearce and Joe Spratling) just overcame Da Bruvs (Jack Wren and Elijah Newman). Joe was the star winning both his singles with Harrison and Elijah winning one each. Jack and Elijah combined effectively to win a competitive doubles.

player if the Week - JOE SPRATLING

Share This Page
About Us
The Medway Towns Table Tennis League aims to assist in the encouragement and organisation of Competitive Table Tennis in the Medway Towns Area. The main goal of this website is to provide league players with the latest news / updates and information throughout the season
Useful Links