With the week being set aside for Round 2 of the Singles Super League, only a few league matches took place.

Torbay Academy’s 10-0 defeat of NA Buzzards took them up to 2nd place in the First Division, only one point behind Brixham Sharks. The Academy side of Kris Piwowar, Patrik Cincala & Dan Barnett, needing as many points as possible to close the gap on the Sharks, had one or two narrow escapes as they completed the whitewash over the Newton Abbot side. Both Connor Adams & Mike Kiff were 2 games up on Dan Barnett & Patrik Cincala respectively, Adams losing 6 consecutive match points in the fourth game against Barnett.

Marldon overcame Brixham Swallows in the only Second Division encounter, despite a fine maximum by Swallows’ Andy Millman.

Denbury Tykes’ impressive 9-1 win over Hasbeens consolidated their position at the top of the Third Division. Martin Dilkes remains unbeaten, whilst Steve Metcalfe picked up his third maximum in a row for the Tykes; Hasbeens’ single win coming from Richard Fitzgerald who beat Pat Darch 11-8 in the 5th to gain Hasbeens’ point. 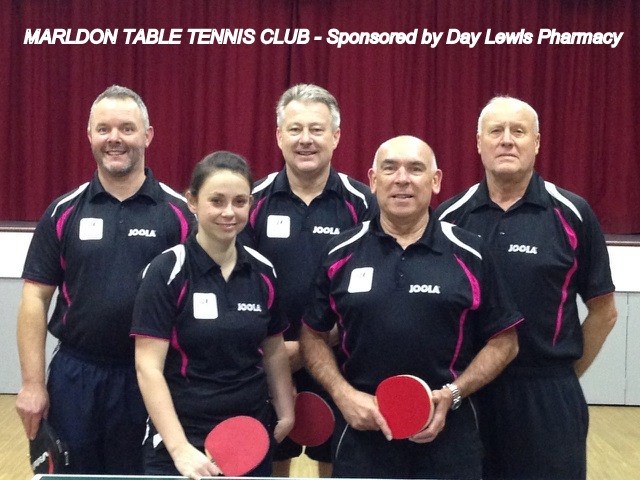 Marldon Table Tennis Club, 6-4 winners over Brixham Swallows this week, pictured wearing their new shirts supplied by sponsors Day Lewis Pharmacy, who are proud to sponsor Marldon TTC.  Two of the core values of Day Lewis are supported by this sponsorship; ‘helping people in the community to feel better’ and to ‘have fun’.