With 36 players taking part it was the biggest entry for a number of years, and with all the League's top players taking part, the standard of play, as expected, was remarkably high, with some of the finest finals ever seen in the South Devon & Torbay Table Tennis League.

The highlight of the day was undoubtably the clash between Stam Kioufis & Kris Piwowar in the open singles final.  Stam, unbeaten by anyone in the league for three years, lost 3-0 to an inspired Kris Piwowar who just got better as the day went on.   Kris, partnered by Patrik Cincala, also got the better of Stam & Adam Shipway in an epic mens doubles final.   It was a good day for the Piwowar family with Kris teaming up with wife Jo to take the mixed doubles and Jo going on to defeat Jazmin Johns in the final of the ladies singles.  Jazmin with sister Holly got revenge over Jo who was paired with Elsa Perry in the Ladies Doubles Final.

The Super Veterans was won by Keith Hawkins who defeated team-mate Peter Nicholson in the final.

The junior boys final was fought between Torbay Academy youngsters Daniel Brewer and Daniel Bartlett, with Dan Bartlett winning 11-8 in the final set.

Holly though, took the cadet girls title with a win over Zoe Barnett

The Division 3 singles event was won by youngster Ben Deakin, who had a 3 straight sets win over Kevin Salt in the final. 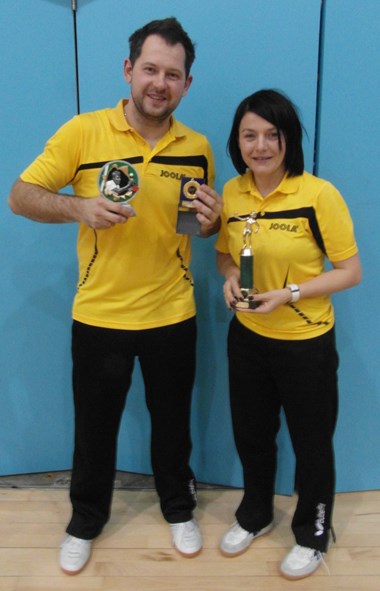