We would like you to tell anyone who might be interested in coming to the sessions. Got a retired neighbour? Is your mum looking for a new hobby? Do you know someone that used to play? We want anybody interested to come along. We will have at least two league players at each session doing some coaching and giving tips. Bats and balls are supplied, and it costs just £3 for two hours of table tennis.

From the league's point of view we would love to see some of these new players eventually join the league but there is the general benefit of having more people playing table tennis and promoting it to their friends and children.

If you know anyone who is interested, please ask them to email chelmsfordttl@gmail.com or contact me on 07857 718351 and we will get back to them with more details.

And if you want to hear your Coaching Officer spreading the good news on BBC Essex, follow the link and listen to the broadcast starting at 2.29.50. http://www.bbc.co.uk/programmes/p05ss6q3 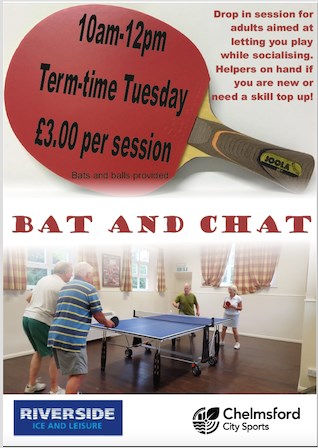