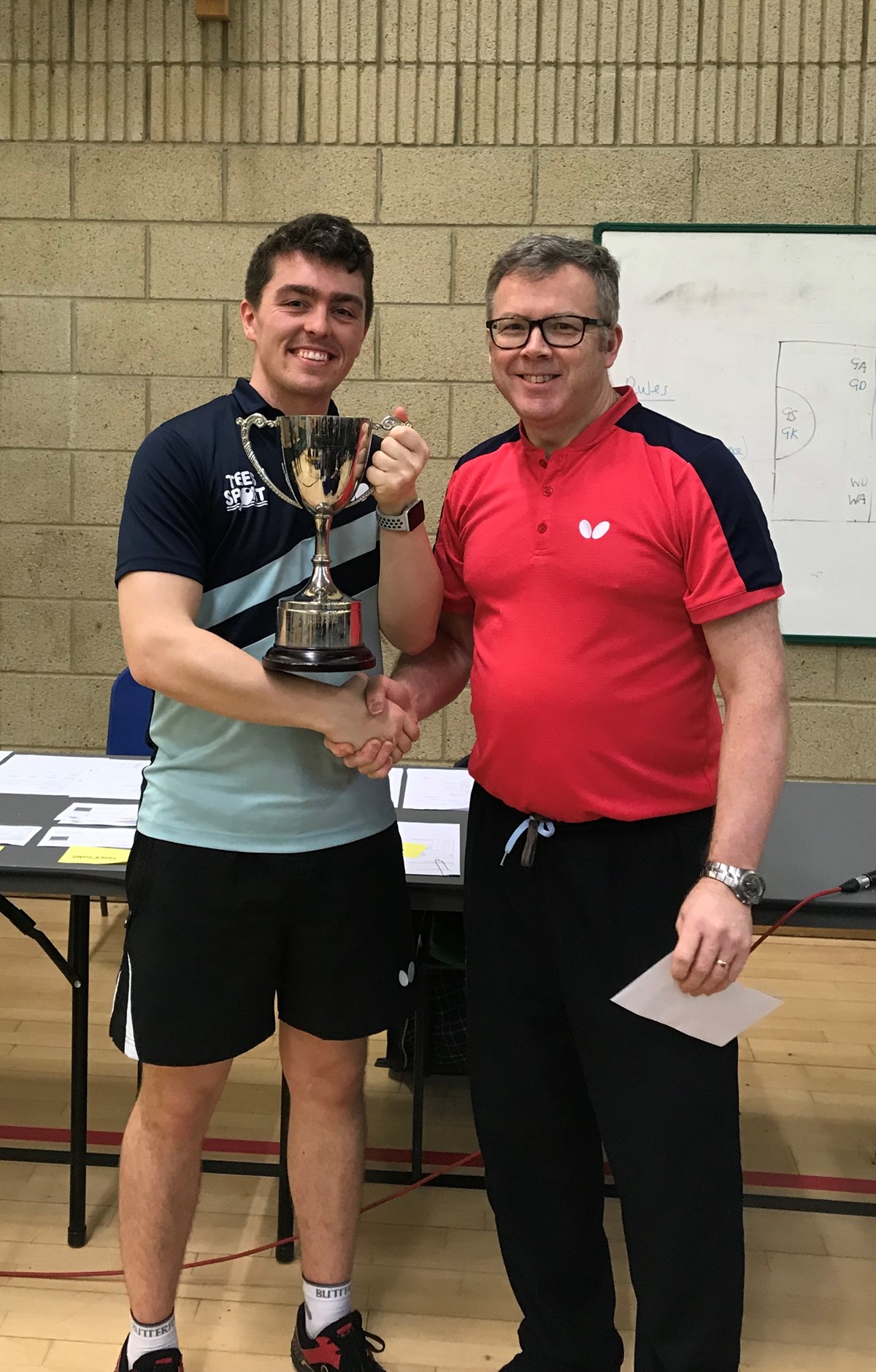 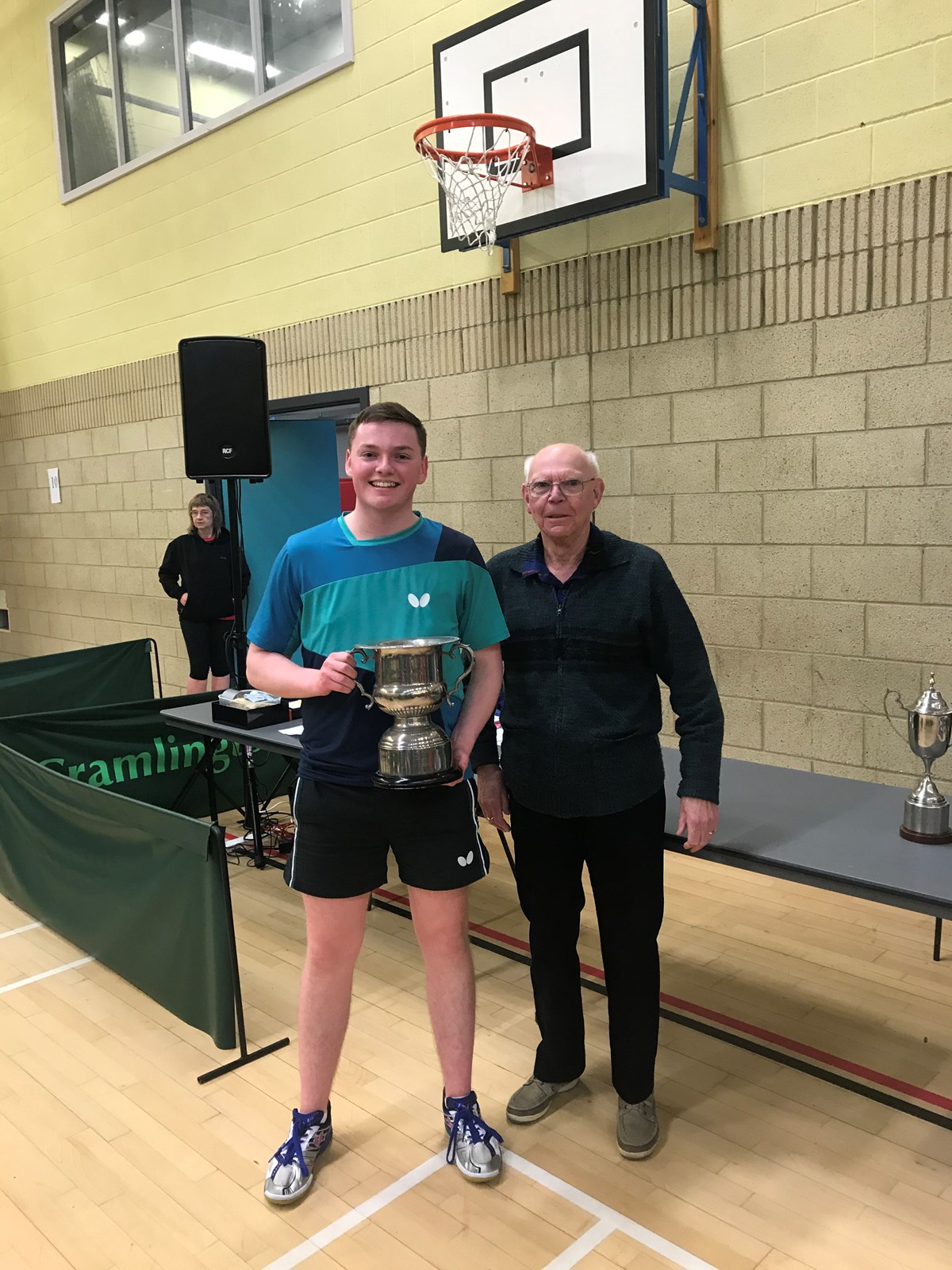 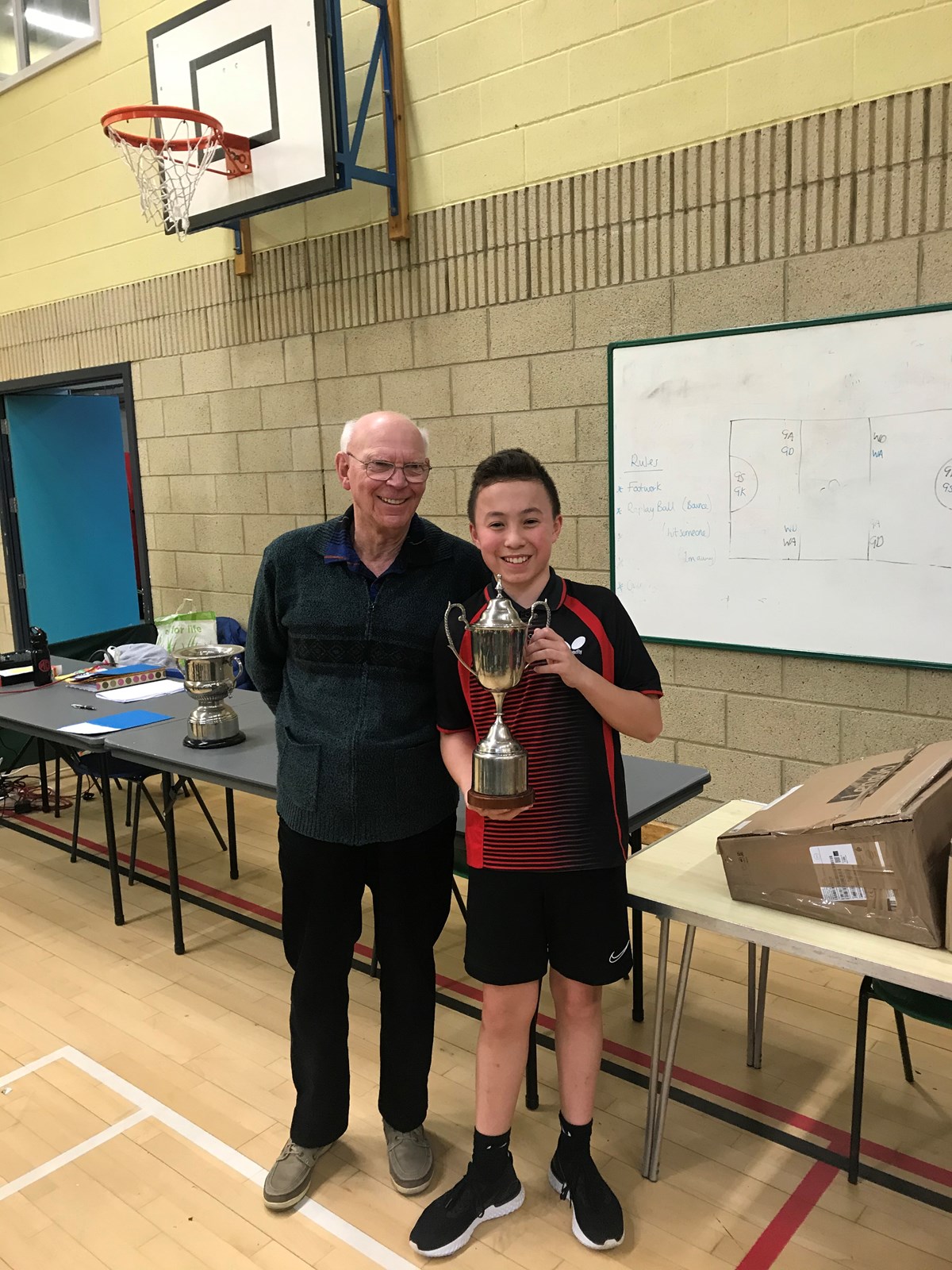 In the Junior tournament Adam Webster secured his fifth consecutive win in the Junior singles beating the quickly improving Oliver Ho from Cramlington in the final. Adam who is ranked number 18 in the current England Junior rankings; and is sure to go higher after recent wins against higher ranked players in recent County representative matches, collected The Norman Moore Memorial Cup.

In the Cadet singles Oliver secured a win against Tyneside’s Leo Conn. The pair both play in the Northumbria League team in the National Cadet league and the first end between them was very close with some great attacking table tennis being played by both players. Oliver was awarded The Harry Dignan Cup for winning the Cadet Singles.

The Under 13 Singles was the closest game of the night with Cramlington’s Jessica Yang coming out on top in three ends against Brian Granada from St Mary’s Catholic school. The score was 9-11, 13-11 and 11-9 to Jessica showing how close the game was.

The Under 12 singles was played in a group format with Jake Hill from John Spence school coming out in first place with Josiah McQueen from St Oswalds school in second place.

In the Northumberland Closed tournament was the final of the Open Singles. This was contested between Andrew Wilkinson and Graeme Barella who are ranked 29 and 39 respectively in the England national rankings.  This time Graeme Barella came out on top and received The Alan Morpeth Memorial Cup for the third consecutive year.

In the Veterans competition Andrew Wilkinson who is ranked number 4 in the current England Veteran rankings defeated his long time teammate Steve Penman in the final. This year there was an inaugural Over 60s singles competition which was won by Alex Holliday from the Matfen club who beat Dave Cutler from the Dunston based Mount club.

For this first time this year the Northumberland Closed featured a consolation singles competition for those players who were knocked out in the group phase of the Open Singles. The inaugural winner was Ken Lee from the North East Chinese Association club who beat Newcastle University’s Matthew Hopkins in a five end thriller that could have gone either way.

After his success in the Junior tournament Oliver Ho continued that form into the Northumberland Closed wining the Handicap singles and the Band 4 Singles. The Handicap singles is based on relative ranking of players and they either start with a points lead or a points deficit. In the final Oliver was pushed by his more experienced Cramlington club mate Nigel Rodgers but ended up winning a close game. In the Band 4 singles Oliver faced another Cramlington club mate, Anthony Doyle, and this game went to five ends with Anthony pulling back from being 2 nil down to level at 2 all before Oliver won the fifth and deciding end.

The other banded singles winners were players play against players of a similar grading were; Steve Penman won the Band 1 singles for the 14th time defeating Jeremy Hamshaw from Newcastle University; in the Band 2 singles David Cutler beat club mate Rod Roberts; in the Band 3 singles Tyneside’s Dean Eadington defeated Mount’s Ethan Brown; and in the Band 5 singles there was an all Cramlington affair between Joe Hastings and Alan Roskilly which Joe ended up winning in a close 5 end game.

The final competition was a doubles in which players are paired up randomly. The winners this year were Chris Blake from St Chads in Sunderland and Cramlington Anthony Doyle who beat the pairing of Dave Cutler from Mount and John Henderson from Newton.