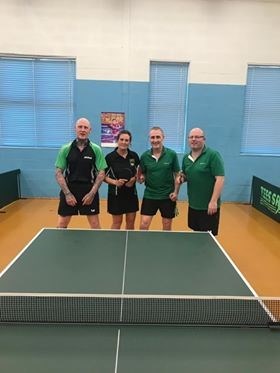 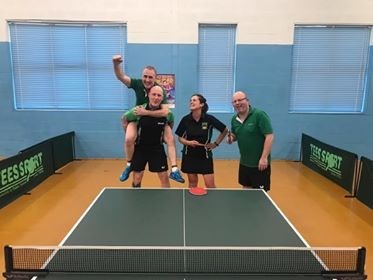 Worcestershire are crowned Champions of Division 1A of the English County Veteran Table Tennis Championships after a grueling final weekend of table tennis staged at the Woodfield club.

After narrowly missing out on promotion on the final hurdle last year the team of Steve Horton (captain), Jason Thompson, Lee Horton and Mandy Sylvester were determined to make amends this season.

The passage was not easy as they had to battle to overcome Lancashire and Gloucestershire in the first series of matches with a 6-4 score line.

Both matches involved some incredibly tight finishes which finished in Worcestershire's favour.

Going into the final 4 matches played over a weekend they started with a gritty performance to draw with a very talented Northumberland side and in this match had a single match point in the final mixed doubles to win the match but fell just short. They quickly responded by beating leaders South Yorkshire 8-2 but this also included some very tight finishes which could have gone either way. In the penultimate match they led 5-2 against Yorkshire 2 only to be pegged back to a 5-5 draw with some 5 set finishes that went in the favour of the opposition.

Gloucester had won 2 and drawn 1 and were within a point and ready to pounce on any Worcester slip up in the final match against Yorkshire 3.

It was an incredibly tense affair with Worcester establishing an early 2-0 lead with 5 set battles. This became 4-0 and eventually reached the finish line with an 8-2 victory to take their position in the Premiership next season which will be an incredible challenge for the team.

Lee was the stand out player for Worcestershire winning 11 of his 12 singles with excellent results also for Jason and Lee's brother Steve also with high win rates and vital wins at key times. Mandy was significantly involved in a high percentage of mixed doubles wins which eventually made all the difference.

"This was a massive team performance in a division that we could easily have got relegated from.

The support for each other and determination to reach the Premier League was second to none. It was a solid team campaign with no let up at any stage from any player."