The two early frontrunners cemented their positions at the top of the table with 10-0 victories. Rod Lewis, Mahroof Hussain and Michael Credland were untroubled as Colebridge Pasties maintained their one point lead by overcoming Ashorne. Pasties' closest rivals Stratford A continued their unbeaten start to the season with a 10-0 victory over their own D team. History was made before a point had even been played with the match contested on a Saturday morning for the first time when Pete Barrow, Debbie Barrow and Richard Grover proved too strong for their fourth string. The fixtures also paired together the club's other two teams where again the result went according to the formbook with Stratford B defeating C 7-3. Kevin Taylor and Michael Klein produced perfect performances for the victors, while Robert Bartkowski, Peter Florence and Alistair Francis got on the card for Stratford C. Francis was involved in the only encounter to go to a decider where, after losing the first two ends to Ian Nash, he staged a brilliant recovery to take the honours and thereby record his first league success.
Shottery A also inflicted the whitewash as Gary Stewart, Graham Poole and Stephen Foster put on a sparkling performance at Henley. However it looked as if the hosts would salvage some consolation when Nigel Payne took a two set lead against Foster, with the second end secured without loss of a single point. However Foster then launched an amazing comeback to clinch the game over the full distance.
Closest encounter of the week saw Tanworth Taipans gain a narrow 6-4 victory against Blazing Paddles. Jason Rainey maintained his perfect start to the campaign by chalking up a treble with the loss of just one set. Mick Welsh added a brace, with Denis Kynaston earning their crucial sixth point. Kynaston was involved in two games to go down to the wire with contrasting fortunes. He clinched the first two ends against Nello Mauri only to lose out at the final hurdle, but gained victory over Wilf Chan after recovering from a two set deficit. Chris Dickens recorded a brace for Paddles before partnering Mauri in the concluding doubles which they won 13-11 in the decider.

Chan had a busy evening as he was also in action for Shottery B who entertained JLM Kingfishers on the adjacent table. The hosts were represented by just two players and Chan recorded their lone success by narrowly overcoming Stef Mytton. Piotr Penczkowski and Jim Clarke were both unbeaten for Kingfishers with Mytton adding their other score. 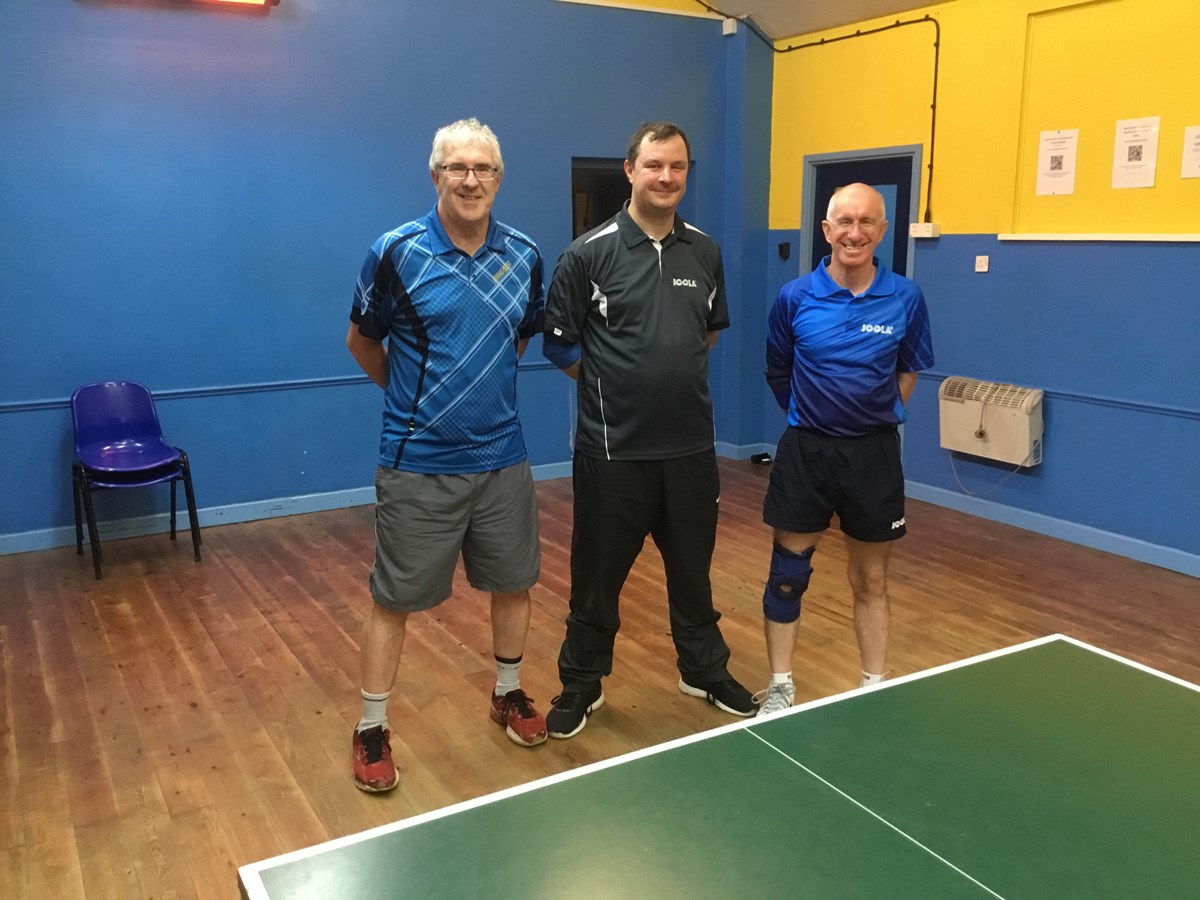 Colebridge Bulldogs (pictured above, left to right ; Andy Rowland , Chris Welsh and Dean Hicks) are through to the second round of the knockout cup after defeating Veterans. Their trio of Andy Rowland, Chris Welsh and Dean Hicks racked up 378 points during open play to give themselves a lead of 216. The handicap adjustment reduced this by 103 to still leave them with a substantial winning margin.
Author: Mike Evetts via Stratford-upon-Avon Table Tennis League
Article Published: Sunday 27th October 2019
Last Updated: Thursday 31st October 2019