The Scottish Inter League Championships took place over the weekend of 25/16 March at Bells Sports Centre in Perth.

The Inter-League is a national event where each affiliated league region in Scotland select players to represent their league at the various age categories, and needless to say the teams selected to represent Aberdeen in the junior age categories were entirely made up of ASV Table Tennis Academy Players.

Aberdeen entered 5 teams in a variety of junior categories, u13 boys & girls, u15 boys, and u18 boys & girls. There was an expectation that Aberdeen would win 2 of the 5 categories entered, but the performances of the times far outstripped the expectation, and Aberdeen returned with 4 junior titles, and the runner-up spot in the 5th event!

As if often the case, West of Scotland had a very large and very strong contingent at the championships, and in all 5 events our junior teams were entered, the final was contested between Aberdeen & West of Scotland teams!

The u13 girls of Willow Shek (Greenbrae Primary) & Haniya Petryk (Seaton Primary) kicked things off in style for Aberdeen. The girls teams are made up of pairs, with both players playing each of the opposing team and contesting a doubles match. Willow got Aberdeen off to a great start, with a comfortable win against the WoS No.1, who Willow beat earlier this month to win the Scottish u13 title. Then Haniya stepped up and also played very confidently to take a second comfortable win and put the girls into a 2-0 lead. The doubles was next and only 1 point more win was needed to secure the title for Aberdeen. As the current Scottish primary schools doubles champions Willow & Haniya had nothing to fear and romped to a fine win, securing the U13 Girls Scottish Inter-league title 3-0 for Aberdeen.

The u13 boys team of Josef Bokedal (Aberdeen Grammar), Louis Loi (Markethill Primary) & Ye Ye Mo (St. Machar Academy) had a very tough task in the final. Boy’s teams are made up of 3 players, with the 1 & 2 seeds from each team playing twice.

All 3 of the WoS team are Scottish primary school international players, with only 2 of the Aberdeen team having had that selection in the past. This made no difference to Josef who got Aberdeen off to a great start with a 3-0 win. Louis was up next and went down 1-3 to Rayan Khalid from WoS, the boys know each other well and Rayan managed to ease past Louis on this occasion. Ye Ye than faced off against Chad Duncan. Ye Ye did not make the Scottish primary selection this year, but Chad is on the team and was favourite to take this match. Ye Ye got off to a great start taking the first two ends to race into a 2-0 lead. After leading in the third end, Chad rallied and took the set after deuce to put the pressure back on Ye Ye. The forth end was tight but Ye Ye held his nerve to take an excellent and unexpected win and put Aberdeen into a 2-1 lead. Josef was up next again, and as the highest ranked player on show was expected to win. Josef lived up to this billing, taking another 3-0 win and giving the Aberdeen boys the u13 Scottish Inter-league title with a 3-1 overall win. This was an unexpected victory for our u13 boys, and secures the fifth u13 boys title in a row for Aberdeen – every year since the ASV TT Academy was formed!

Next up was the u18 girls. Tessa Yau (Albyn School) & Isla Stott (St. Margaret’s School) took on Alisa Khalid and Jenny Yang from WoS in the final. Tessa was up first against Alisa, the current Scottish u18 No.2. Tessa was down 1-2 in the match and looked out of it. However a series of impressive attacking topspin’s from both wings saw Tessa right back in the match at 2-2. After being close at 5 points all in the deciding set, Tessa pulled away for an excellent 3-2 victory. Isla then took on Jenny, controlling the match nicely and also displaying her own attacking game, to take a 3-1 victory and put Aberdeen into a 2-0 lead overall in the match. The match was far from over and Tess & Isla found themselves 0-2 down in the doubles. The girls called on all their experience from their local team matches where they play doubles together, and incredibly took the next 3 sets to seal a 3-2 doubles victory and a 3-0 match win! The Scottish U18 girls title was on the way to Aberdeen again after a gap of over 10 years.

After seeing the success of the girls, the u18 boys were keen to deliver a similar result. Andrew McRae (Westhill Academy), Elias Bokedal (Aberdeen Grammar) & Murray Gauld (Hazlehead Academy) came through all their matches with 5-0 victories previous to the final match against WoS, so had made themselves favourites. Andrew, who was playing exceptionally well all tournament, led by example securing the first match for Aberdeen. Elias, who had been ill only the day before the event, was up next. Elias worked hard and controlled the match using pace and angles to ease into a 2-0 lead for Aberdeen. Murray had a tough match next, and was up against arguably the WoS No.1 who had shuffled their team to try and overcome Aberdeen for the final. Murray took a set and had a couple of deuce matches, but eventually went down in that match to make it a 2-1 lead for Aberdeen. Back to Andrew & Elias who both comprehensively secured further wins, for a final score of 4-1 to Aberdeen and another Scottish Inter-league title for the u18 boys, retaining the trophy from last year. The Aberdeen boys had an incredible run of 24 wins from 25 sets across the event, an almost perfect record.

Toughest event of the day was the u15 boys category. Rafal Wilowski (Banchory Academy), Alasdair Crofton (Robert Gordons School) & Yifei Fang (Robert Gordons School) had excellent wins on the way to the final match, most notably against a strong Edinburgh team. The final match against WoS was always going to be a tall order with West’s Zaid Khalid and Charlie Morton both ranked higher than all the Aberdeen boys. Yifei who had stepped up from the u13 age category for the boy’s team, was first against Charlie Morton. Yifei had set points in the first two sets of the match, but was unable to capitalise and went down in that game. Then Rafal took on the current Scottish u15 No.2 in Zaid. Again Rafal pressed his opponent all the way but Zaid had too much power in his attacking play and left Aberdeen 0-2 down. Alasdair, who has the least tournament experience of the boys, made a great effort to take a set from the WoS No.3, but also lost out and Aberdeen had to settle for the Silver medal in the u15 boys.

With 4 Scottish Inter-league titles and a Silver for our 5th team, it could only be described as a fantastic week for Aberdeen Table Tennis, and the best performance for a long time for Aberdeen teams at this event. Well done to all!

The Inter-league championships is the last National event of the season, however 6 ASV TT Academy players will be competing for Scotland in the GB Schools Home Internationals over the next months, and we are hopeful for the selection of Dylan Curry to the Scottish u15 boys team for the European Youth Championships also later this year . 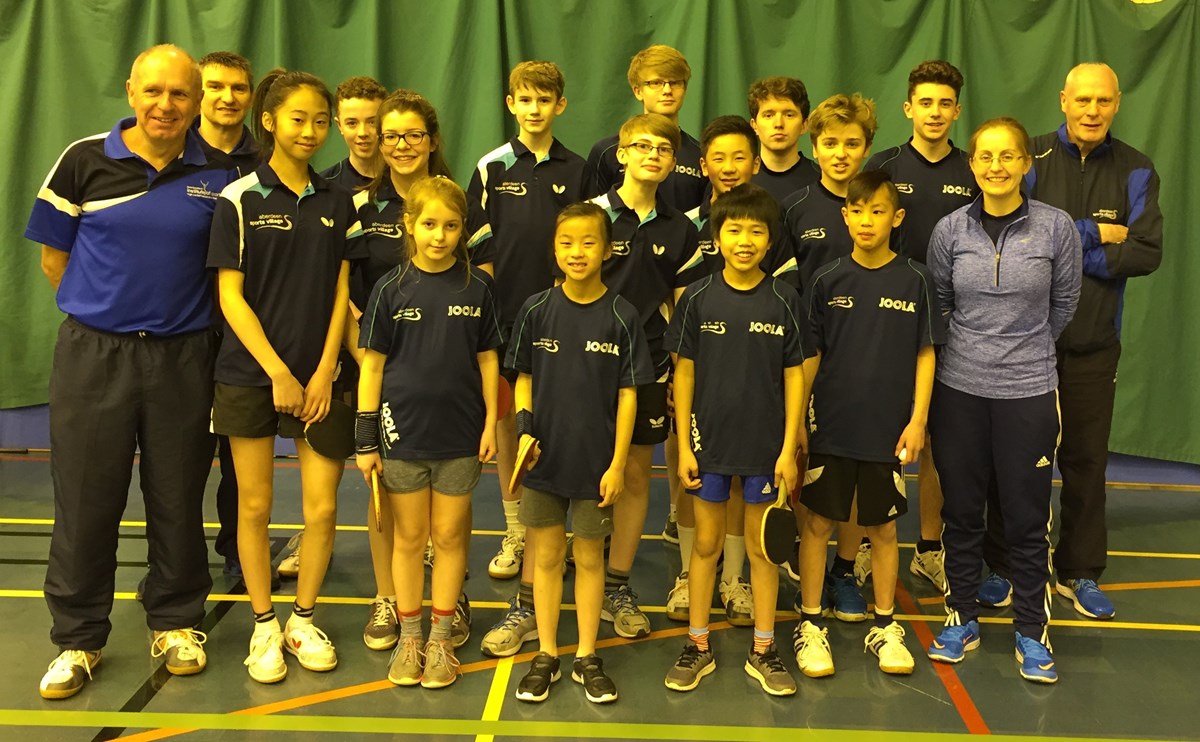 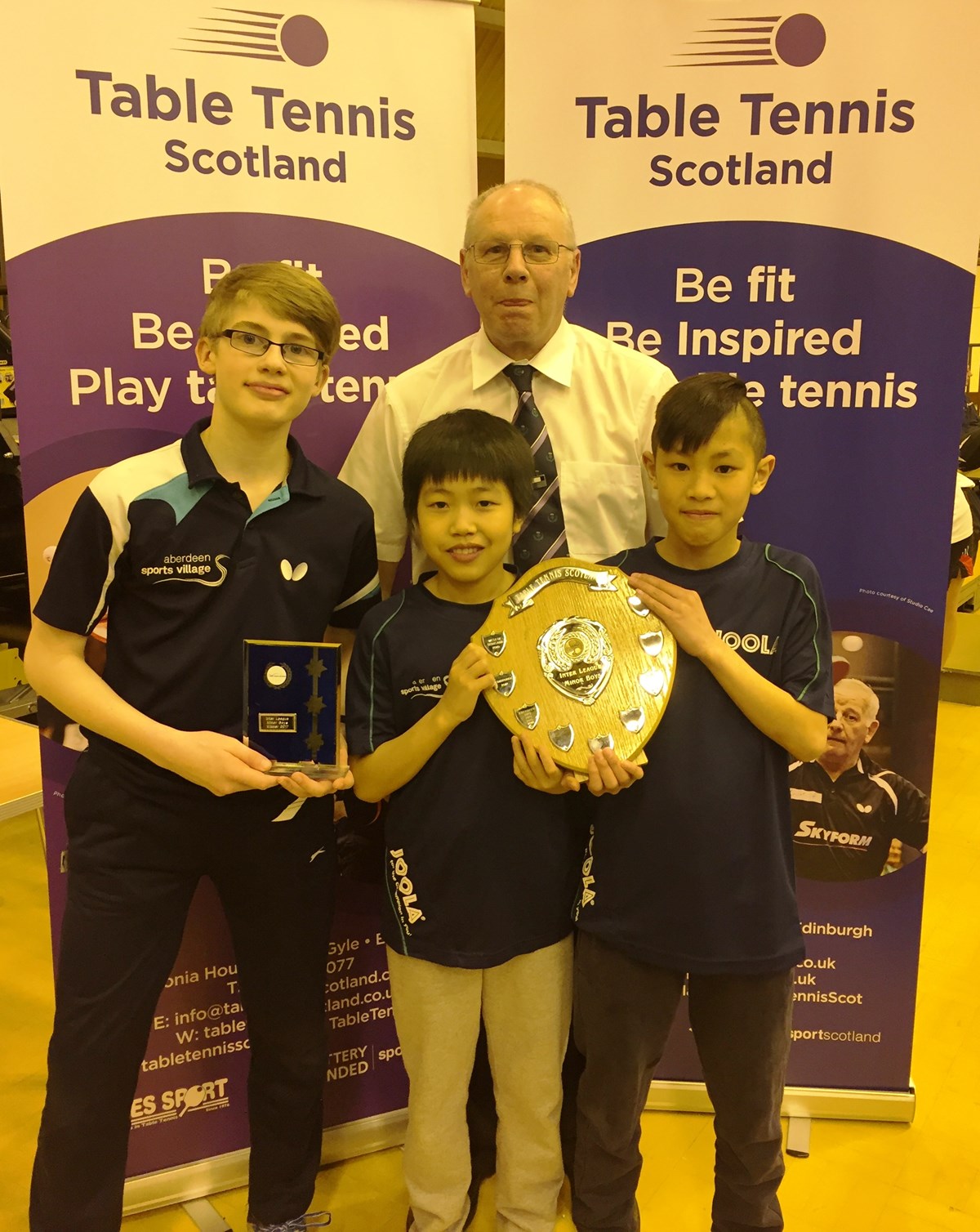 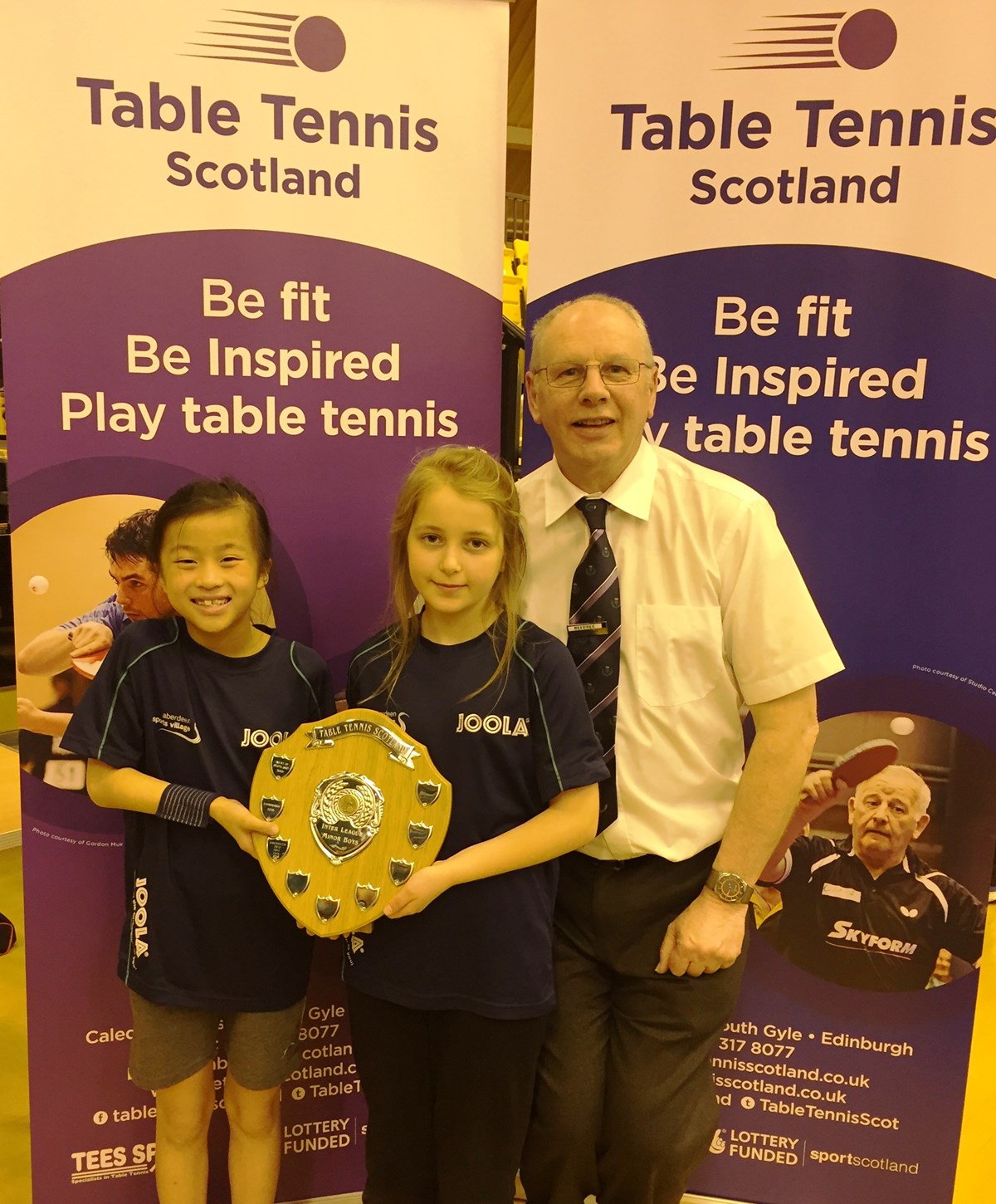 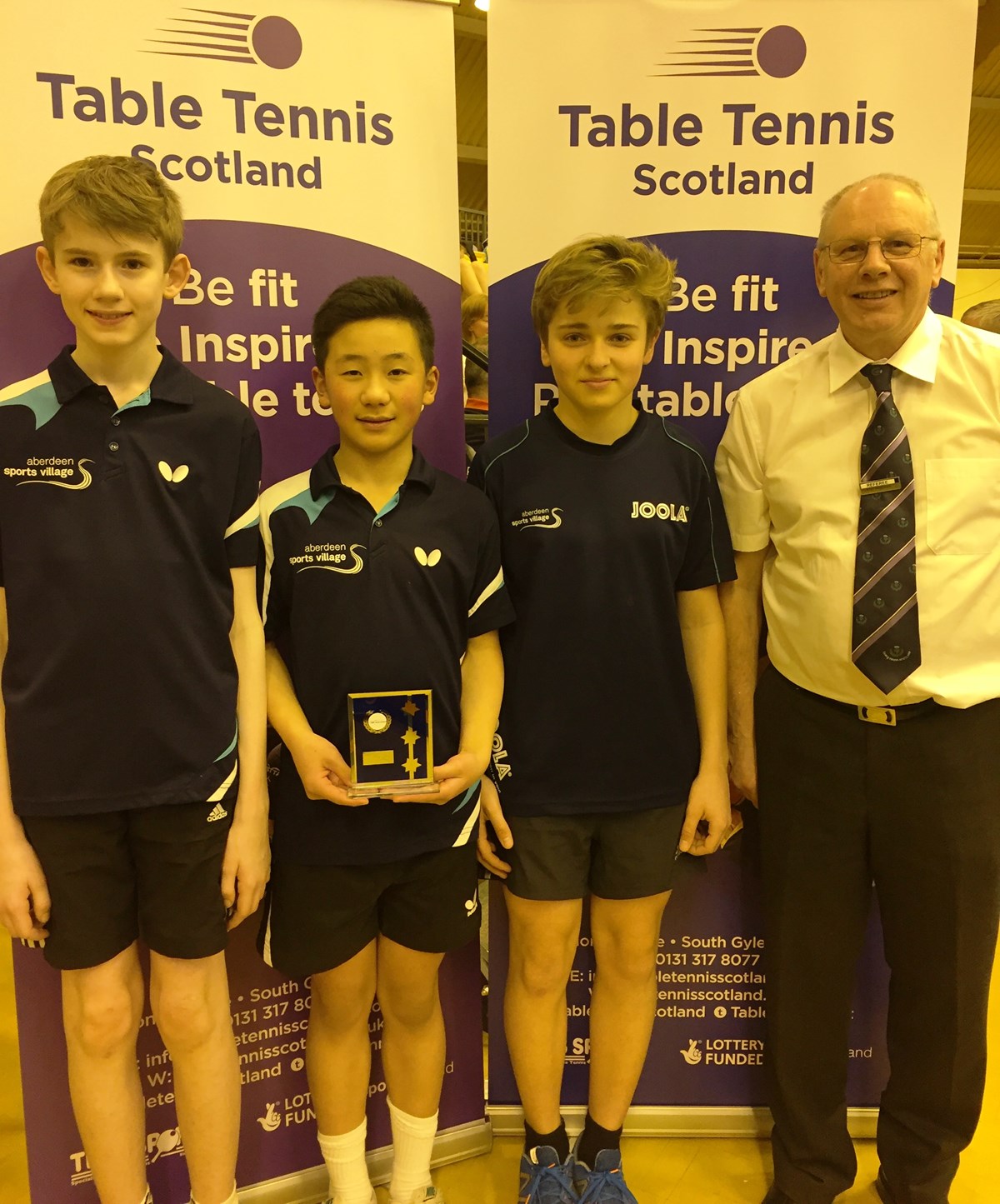 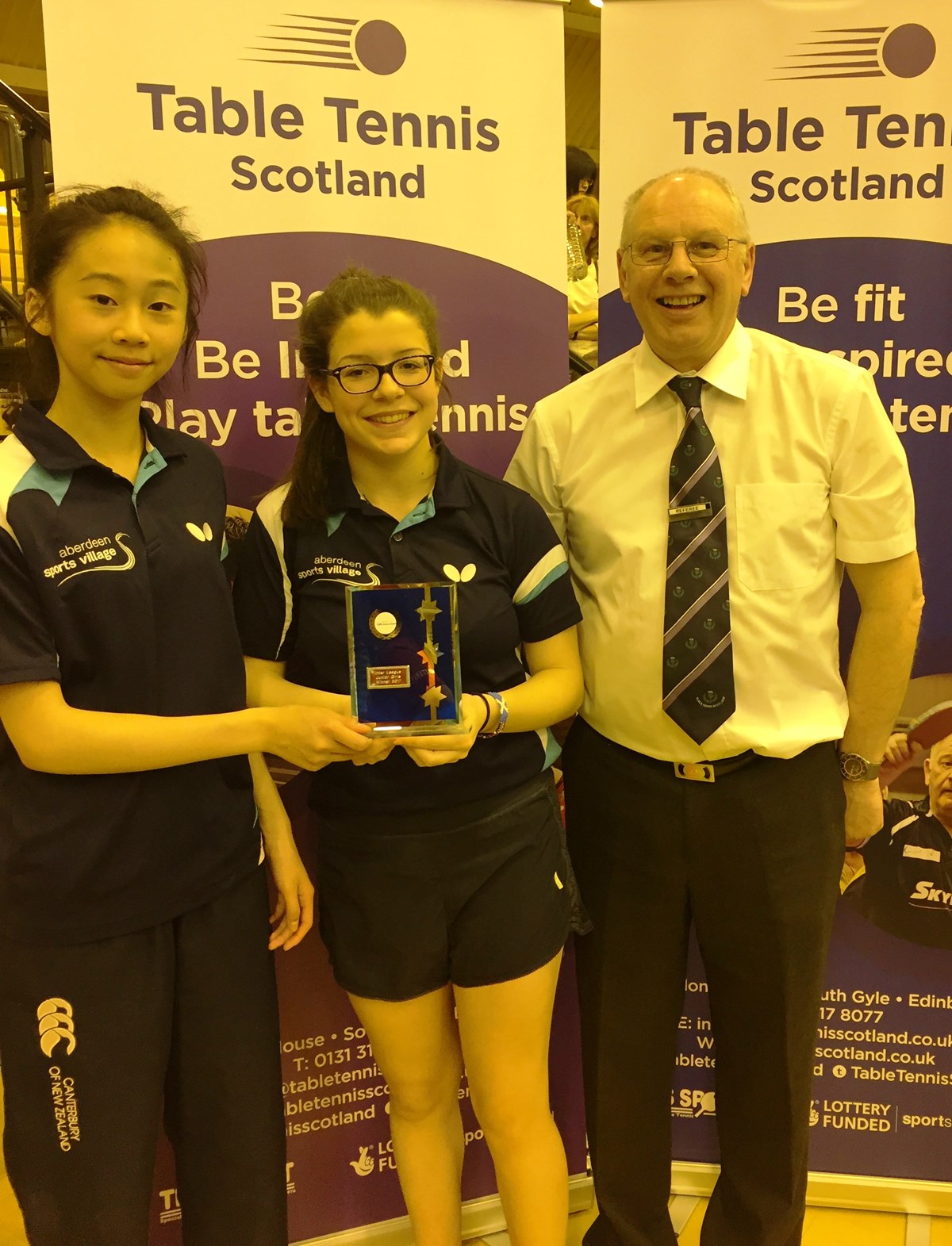 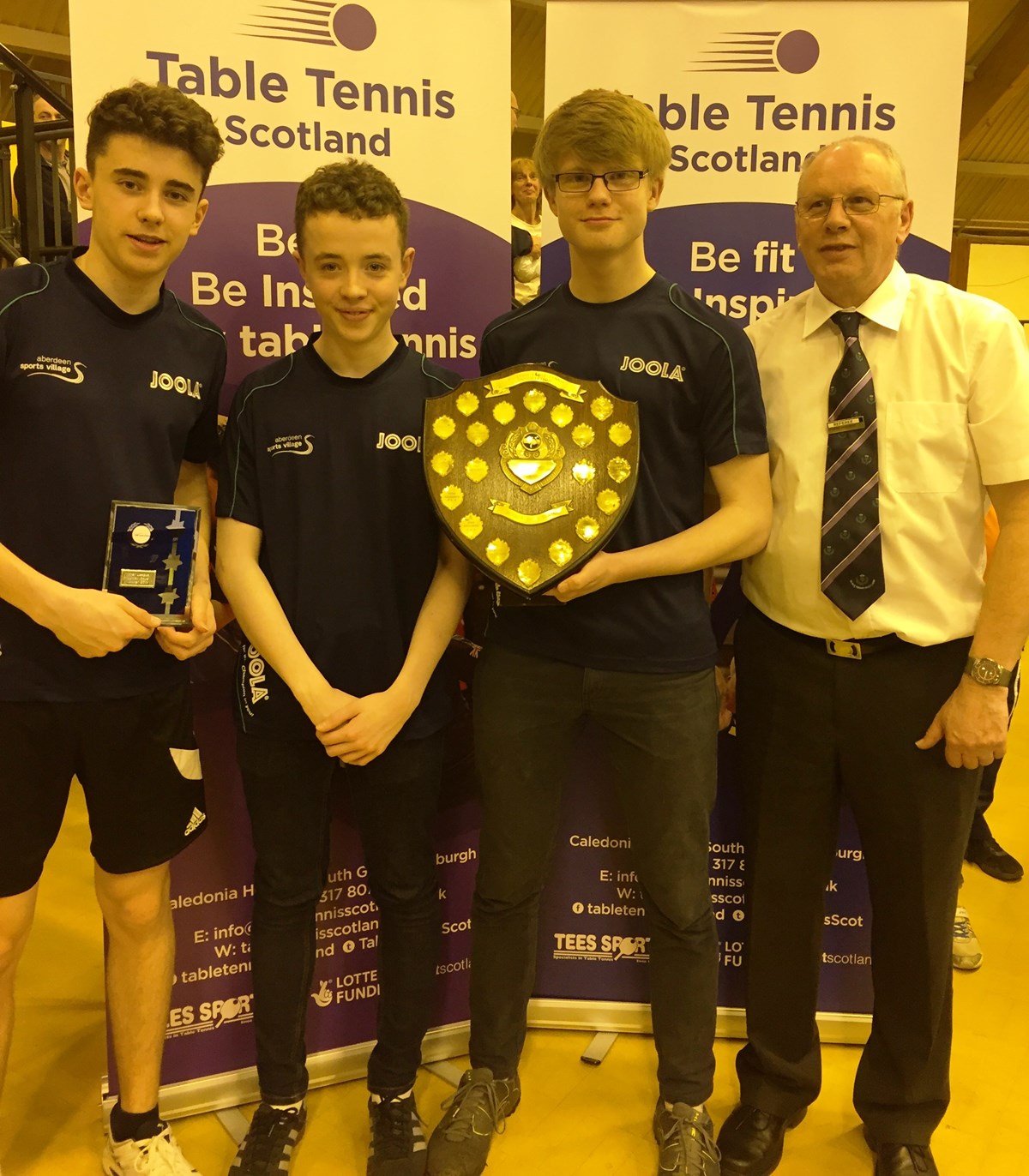