Finals Night was held on March 22nd at Champions Manor Hall and was well supported with about forty spectators in attendance. Full videos of each match can be found on the league’s Facebook page here - https://www.facebook.com/BurnhamTT/ - including a couple of stand-out points caught on video from an interesting angle. Photos and more videos are on the league’s Flickr page here - https://www.flickr.com/photos/141109142@N05/albums - credit goes to Eamonn Hall for all of the evening’s filming and photography, who did a brilliant job. Thanks also go to Dan Anderson on microphone duty, everybody who helped set up or pack away, and the refreshments team raised £45 in the space of about ten minutes despite us cutting the interval short; thank you Jan Dadswell, Marina Partridge and Val Board.

Onto the action. With fourteen players involved and over fifty percent of the matches containing a ‘Young’, the evening opened as is tradition with the Men’s Singles Semi-Finals; both of these matches were truly excellent with all four players involved hitting form quickly.

In the first, Reece Seddon versus Gary Young, the very first point signalled the high standard to come with title holder and no.1 seed Seddon hitting a rocket down-the-line forehand winner. From there, fourth seed Young produced spectacular attacking and angled play to race into a two-nil lead, 11-6, 11-9. Seddon took the third end 11-8 with a tempting serve into Young’s crossover, and then he raced into an 8-2 lead in the fourth. With such a lead and the opportunity to level things at 2-2, some nerves took hold of Seddon and Young did well to bring the score back to 8-8, things went to 9-9 and at the business end of the fourth game it was crunch time to see who could hold their nerve better, and Seddon did well to regain his composure and take it 11-9 to make things all square. With momentum on his side, the fifth and final end saw Seddon do what he did last year; come out all guns blazing and the majority of the bullets he fired landed, seeing him to a 5-1 lead and then a 10-2 lead with match point, from there Seddon did not let go and eventually won 11-4 to book his place in the Men’s Singles Final. [Umpired by Lee McHugh, full match: https://www.facebook.com/BurnhamTT/videos/1605376516183253/]. 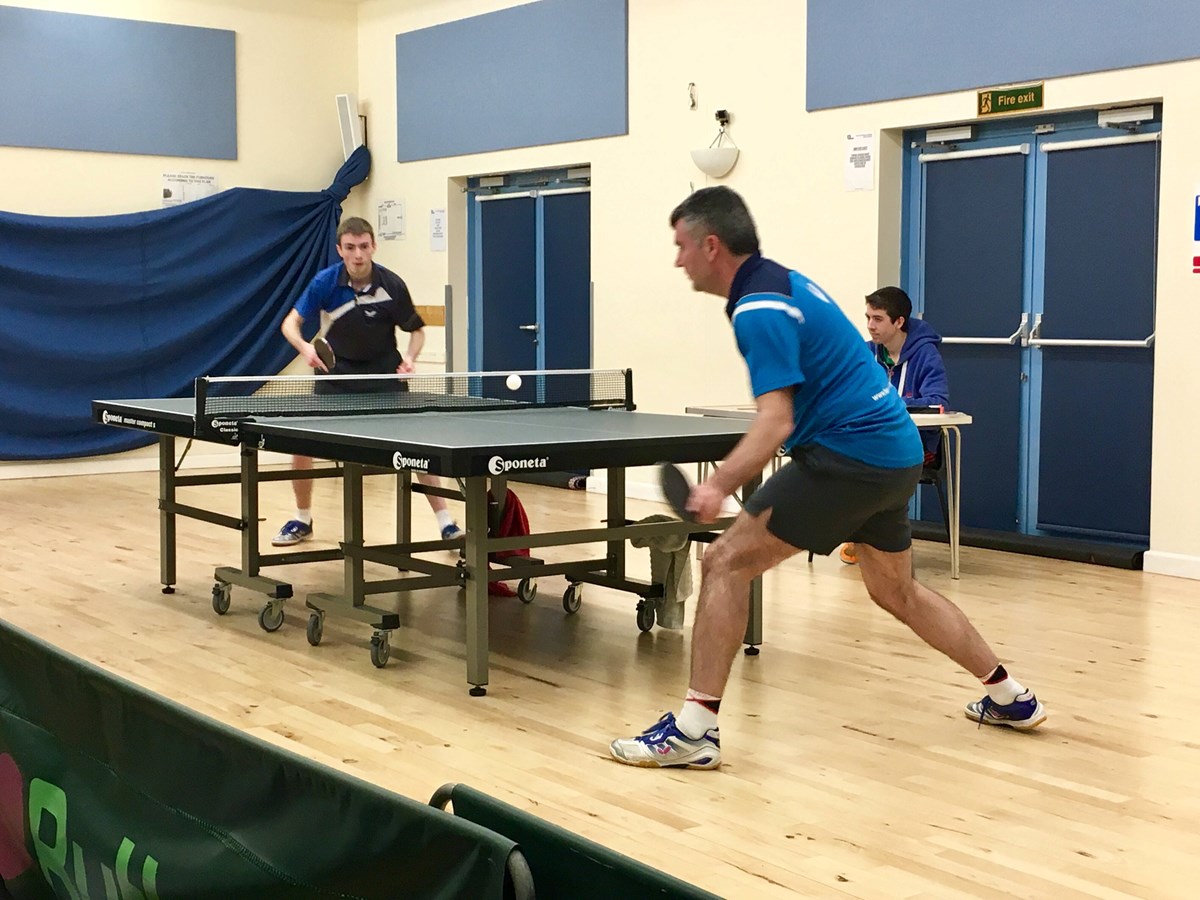 In the second Semi-Final, second seed Duncan Taylor took on third seed Keith Adams, and they had a tough act to follow but duly obliged and delivered, producing in my opinion the best match of the night. The very first point saw Taylor make an excellent retrieval to put the ball wide past Adams with his opponent humorously quipping “I remember!” to the crowd’s delight. Taylor raced into an 8-2 lead with his customary ‘wall-like’ play, and from there Adams fought back wonderfully to trail 9-10 but then failed to lift a final chop giving Taylor the first end. Adams produced some of his finest attacking table tennis to take the next two ends 11-9, 11-4, and Taylor fought back strongly in the fourth to lead 9-4, only for Adams to yet again to fight back to 9-10 like he did in the first, but Taylor kept his composure to unleash a powerful down-the-line forehand attack to win 11-9 and level the game score 2-2. Already we are in another five-setter! Taylor started the fifth end rather well, changing ends with a 5-0 lead, which then became 7-0 and from that scenario it was always going to be a big ask for Adams to recover, and so it proved with Taylor closing out 11-3 to book his showdown with Seddon. As Adam’s aptly described afterwards, playing Taylor in that form is like throwing the kitchen sink over and having the bathtub thrown back at you. [Umpired by Peter Ballard, full match: https://www.facebook.com/BurnhamTT/videos/1605404709513767/] 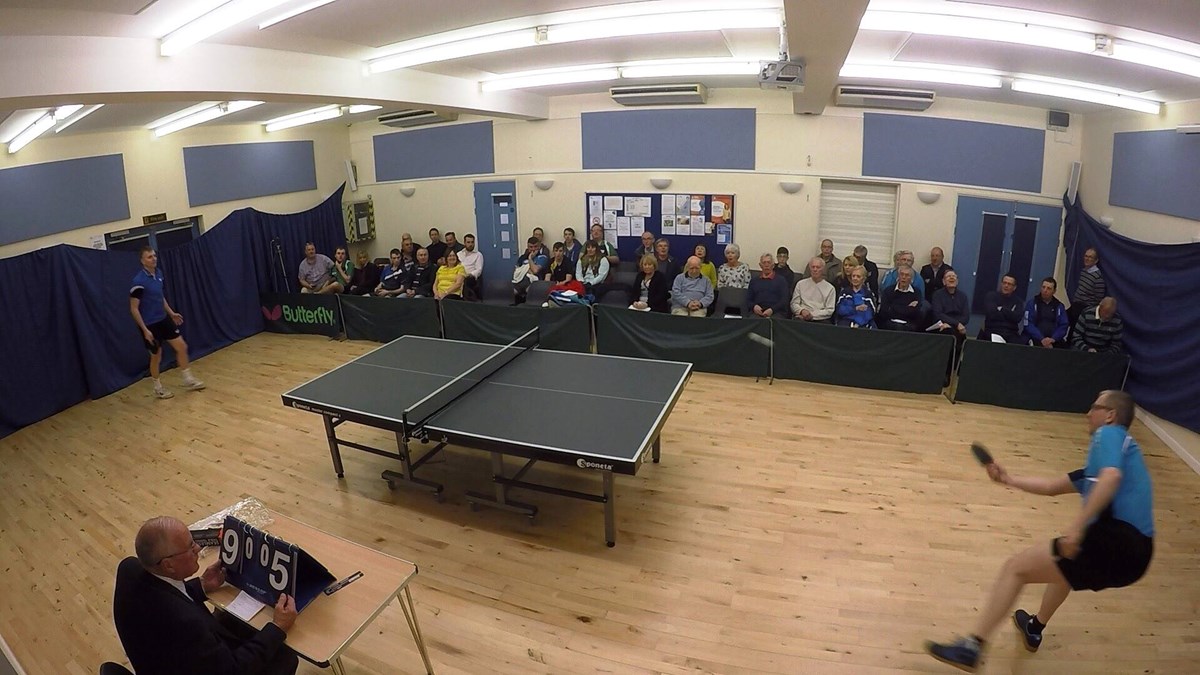 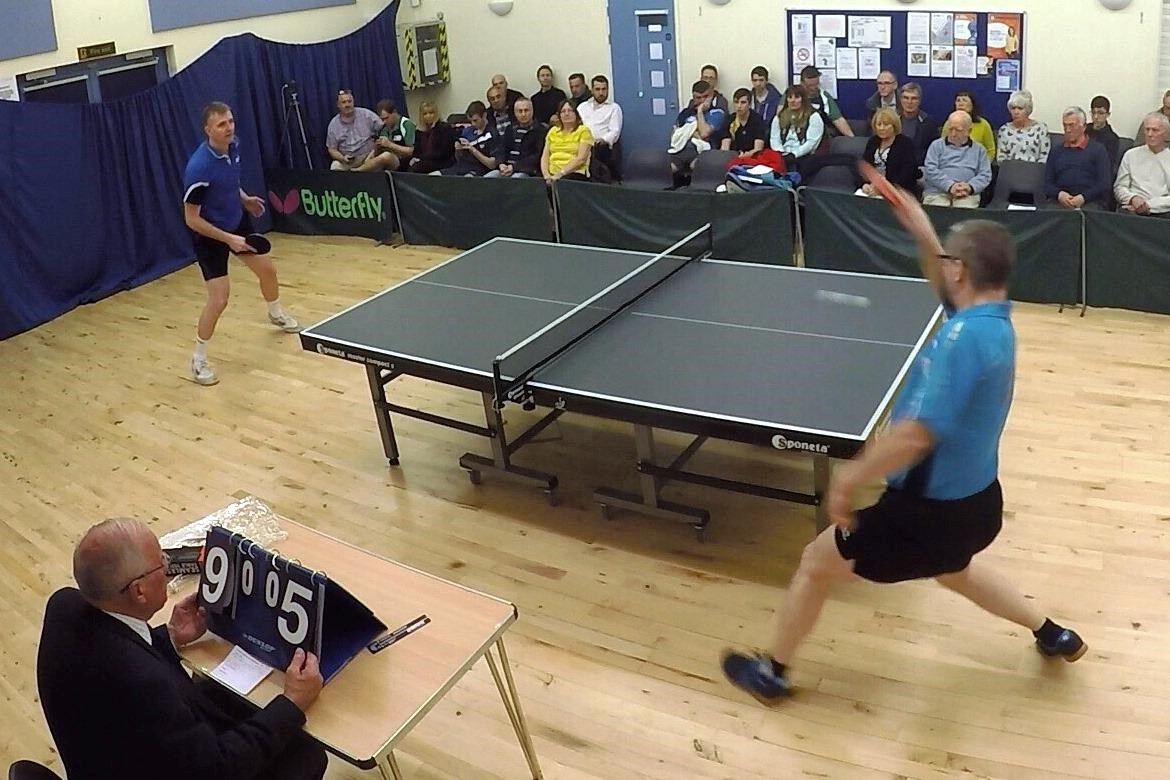 Next was an event not traditionally held on Finals Night – the Handicap Doubles – this was a tough one to call with David Gatheral/Lee McHugh starting on -2 and Scott Perry/Gary Young starting on 0. Attack was very much the name of the game for all four players, with Gatheral occasionally slowing things down with flashes of his OX long pimples, and all players experimenting with different serves to see which gave the most success. McGatheral (or Gatherhugh) snuck the first end 21-19 but Poung (or Yerry) were in control from there on out, and Perry finding his range with a series of well-placed attacks proved crucial as Poung took the next two ends both 21-14 for the title. [Umpired by Steve Scholz, full match: https://www.facebook.com/BurnhamTT/videos/1605440736176831/] 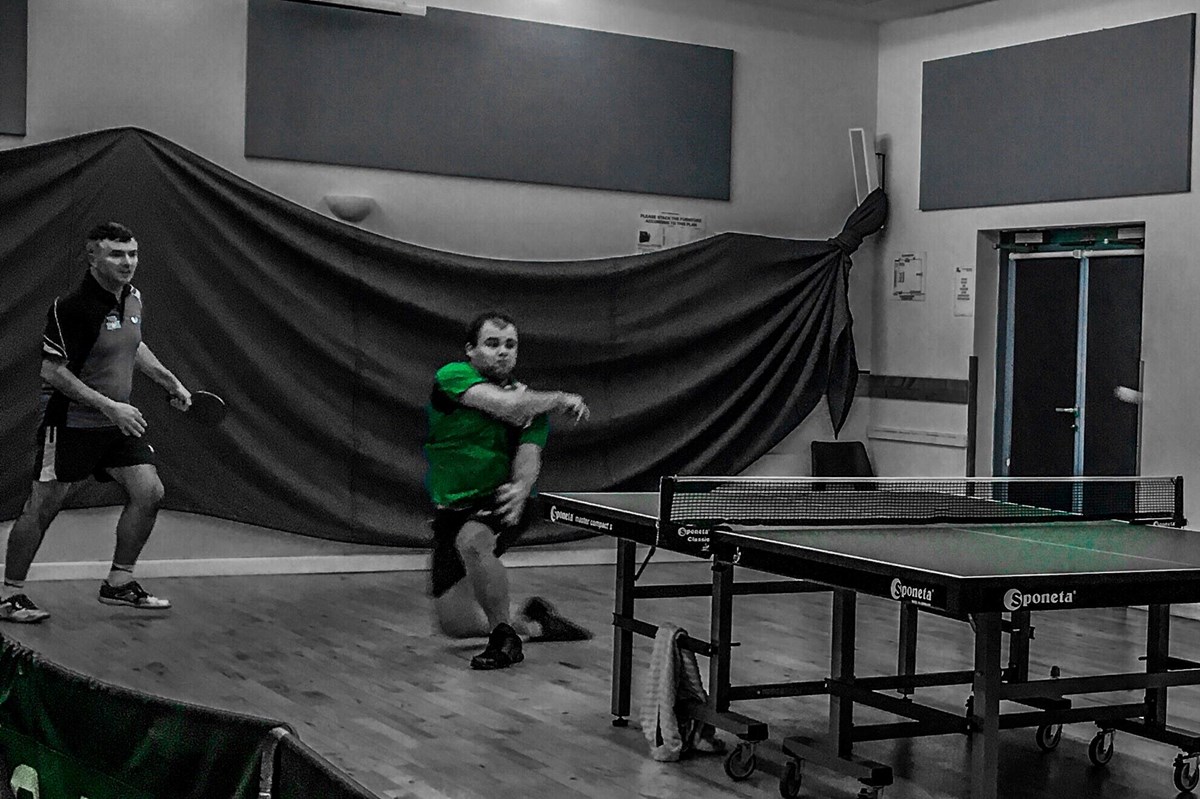 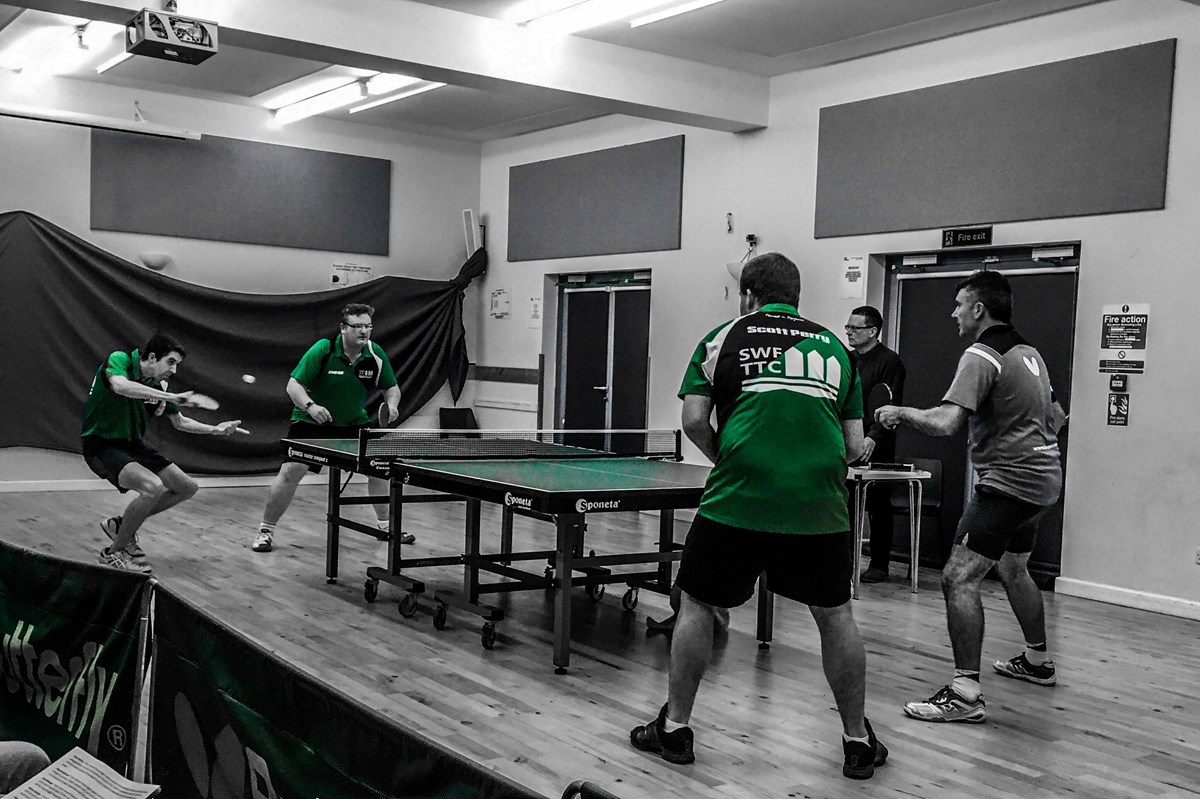 In the Junior Singles Final the opening stages were a bit error-strewn with neither no.1 seed and holder Kieran Stanley or no.2 seed Daniel Young finding the groove of their usual consistent attacking game. As the match went on the nerves settled a bit and both players played big winners. Service proved key in this match, and Stanley struggled more with Young’s serves than the other way around. With Young’s form and recent results of winning the Restricted Singles, Cadet Singles and Junior Doubles (with Ben Porter), Stanley was always up against it here and so it proved with Young taking his first Burnham Junior Singles title 11-9, 11-7, 12-10. [Umpired by Allan Steel, full match: https://www.facebook.com/BurnhamTT/videos/1605468676174037/] 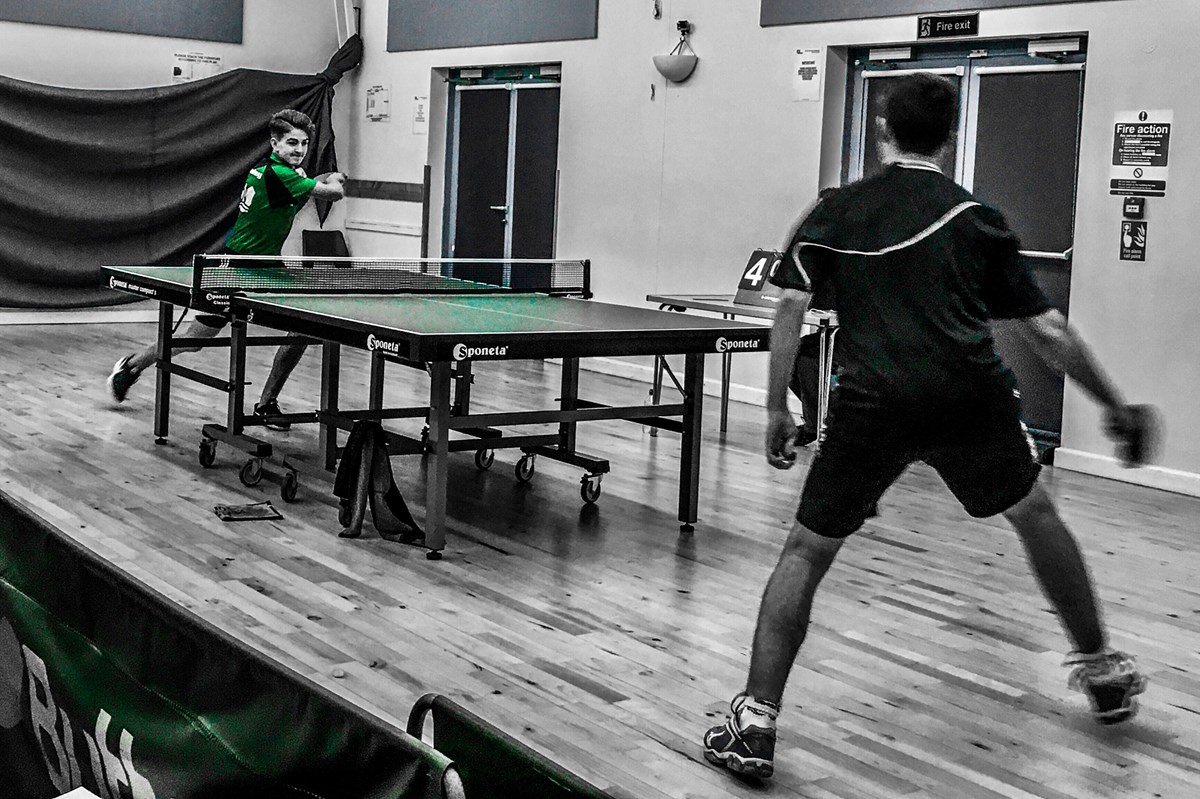 The Veteran’s Singles Final gave both players a taste of what they would have experienced in the Men’s Singles Final if Young had gotten past Seddon in the Semi. Second seed Duncan Taylor faced off against fourth seed Gary Young and a very patient game ensued, both players opting to spend much of the time a few feet back from the table, producing a lot of long, steady counter-topspin rallies. Young played a cracker here, forcing Taylor to gradually up his own attacking game throughout, and over five competitive ends Taylor eventually brought it home 11-9, 11-6, 5-11, 5-11, 11-7 for his fourth Vet’s Singles title. [Umpired by Dave Calleja, full match: https://www.facebook.com/BurnhamTT/videos/1605485646172340/] 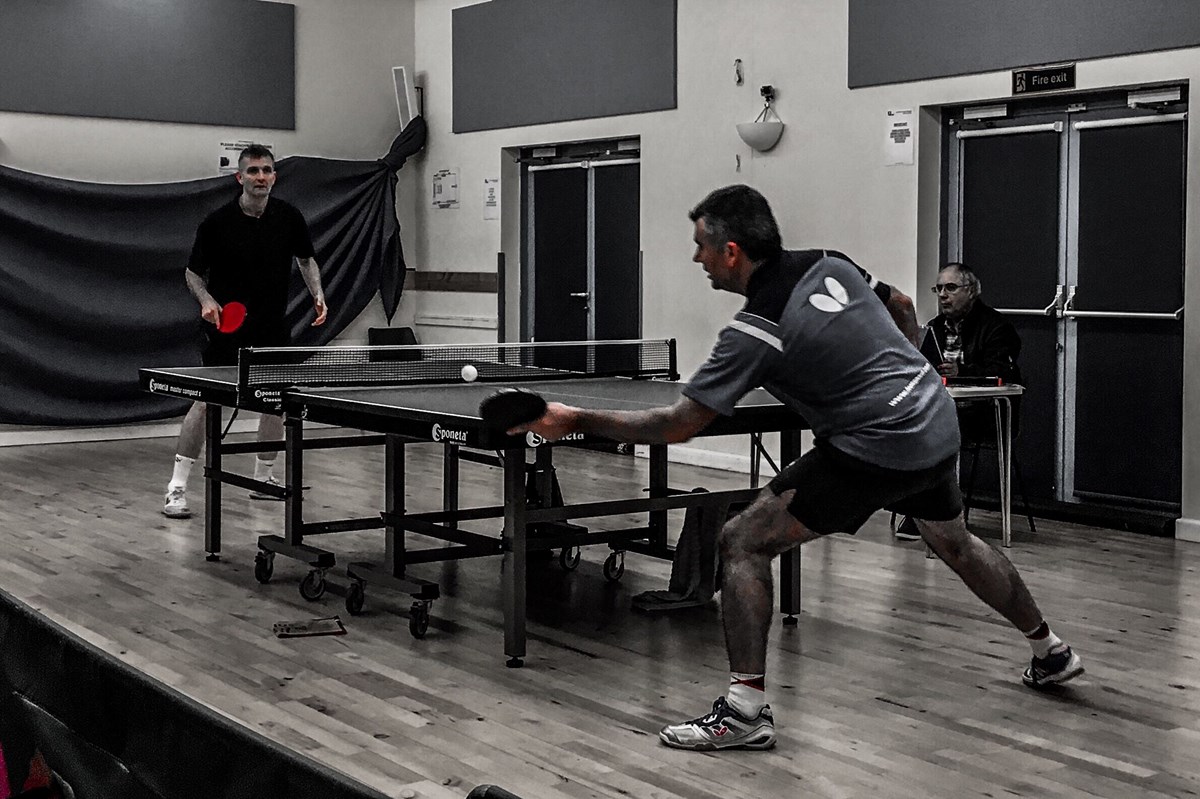 The Mixed Doubles Final was an all-Maldon Club affair with Dawn Baldry/Colin Napper versus Shirley Carroll/Steve Whiteley. With both Carroll and Whiteley winning multiple Ladies’ and Men’s Singles titles respectively in the 1970s (!) one would have to bet that they were the two most experienced players in the room, and certainly the most experienced pair. Yet that fact did not deter Bapper (or Naldry) as their consistency won the day 11-5, 11-9, 13-11. [Umpired by Steve Scholz, full match: https://www.facebook.com/BurnhamTT/videos/1605522762835295/] 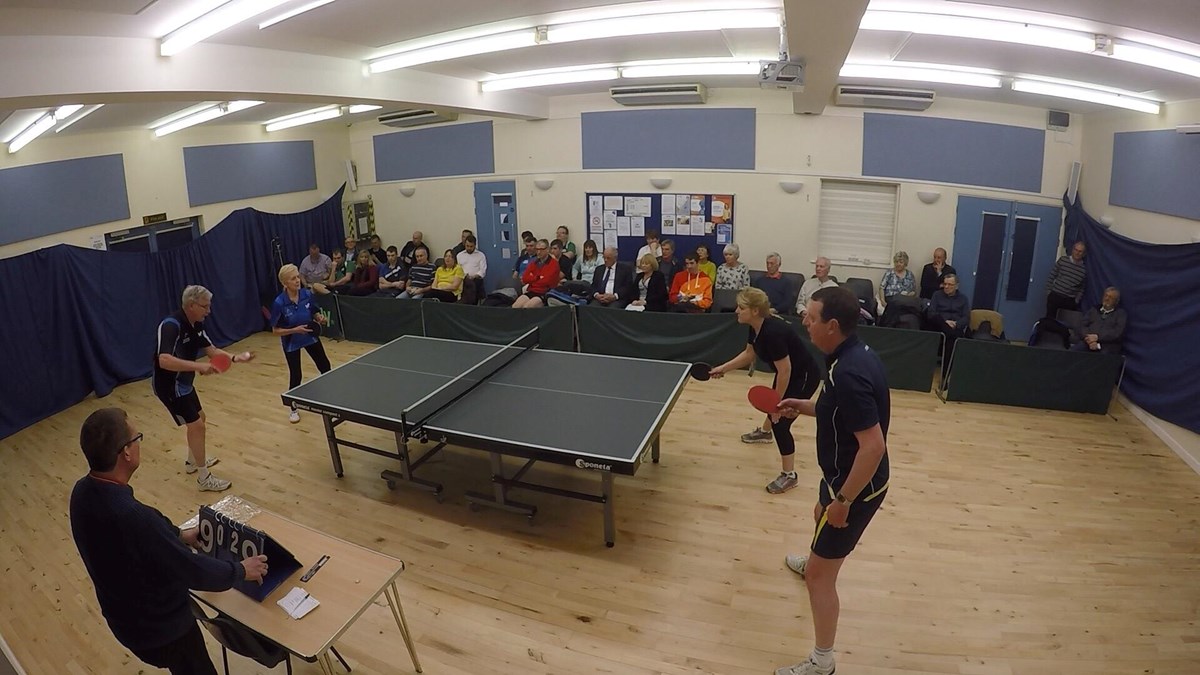 The Men’s Doubles Final saw second seeds Keith Adams/Gary Young pit their wits against no.1 seeds and holders Kevin Read/Duncan Taylor. Raylor (or Tead) are an incredibly solid and consistent partnership and Yadams were always going to need to be landing the majority of their strong attacks to stand a chance. Perhaps it was Taylor’s long term plan to wear out Adams and Young with the previous five-setters while Read was as fresh as a daisy, but I think it is fair to say that Raylor blitzed it taking their fourth title 11-2, 11-9, 11-4. [Umpired by David Gatheral, full match: https://www.facebook.com/BurnhamTT/videos/1605536892833882/] 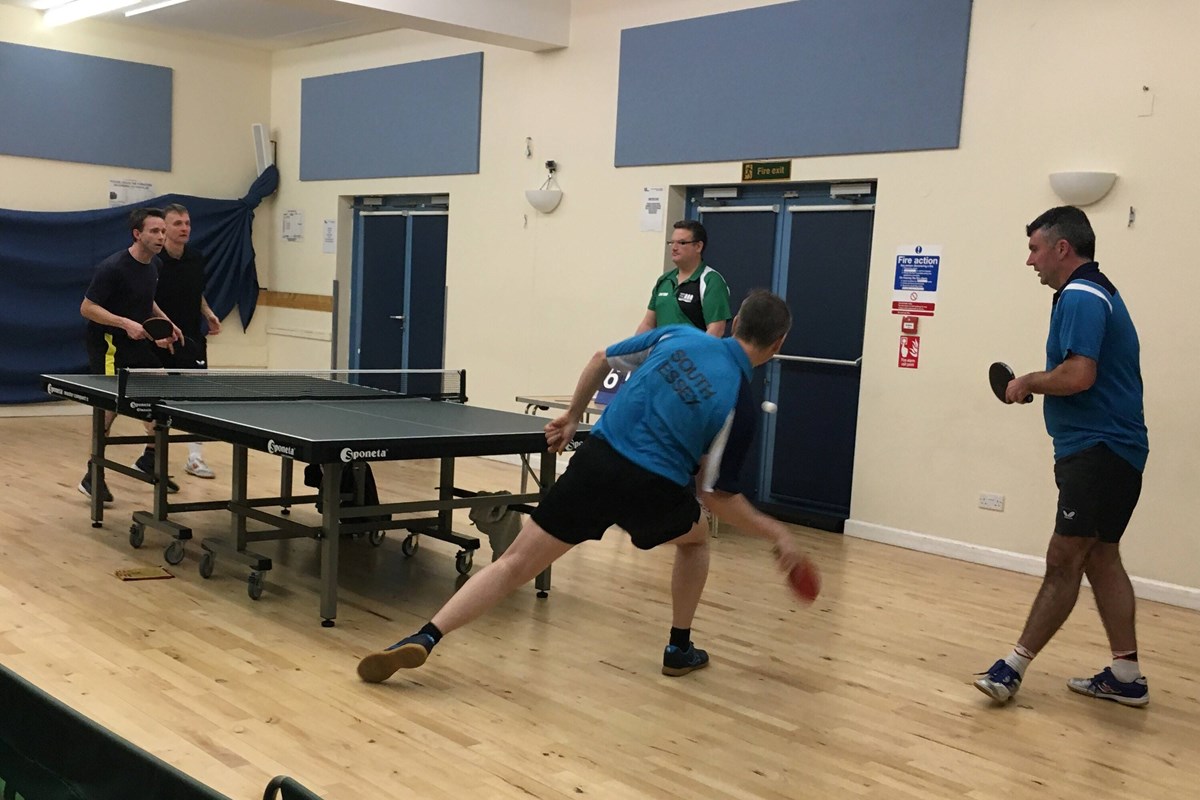 The penultimate match, the Ladies’ Singles Final, saw Shirley Carroll make her first appearance in some time as she faced off against the powerful attacking play of no.1 seed and holder Dawn Baldry. At 5-5 in the second end Carroll produces a sensational counter-attack winner, but overall Baldry always had her nose in front and she added a fourth Burnham Ladies’ Singles title to her record with a 11-5, 11-9, 11-9 victory. [Umpired by Dave Calleja, full match: https://www.facebook.com/BurnhamTT/videos/1605550126165892/] 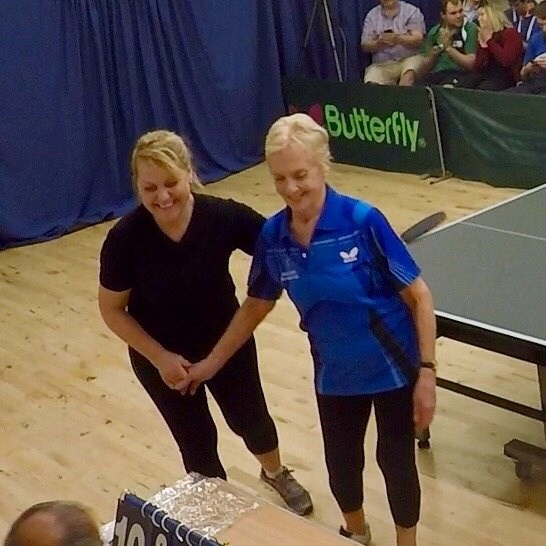 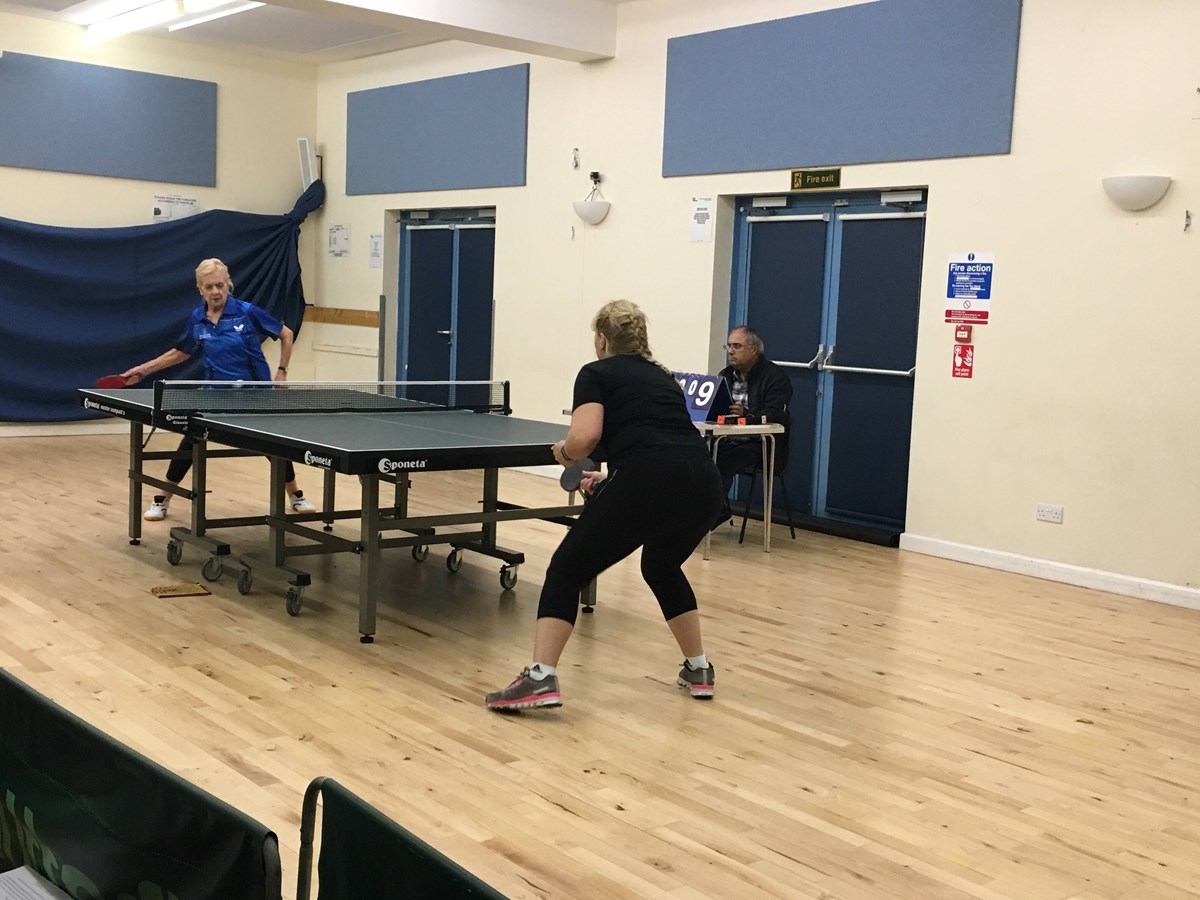 The final match of the evening and the Championships was here, the Men’s Singles Final, no.1 seed and title holder Reece Seddon versus second seed and recently crowned Chelmsford Champion Duncan Taylor. Debatable here if either player had an advantage as Seddon had been sitting down since the first match of the evening while Taylor had been up three times already, confidence bolstered perhaps by taking two titles in the meantime. Seddon got off to a promising start to lead 8-6 in the first end, but Taylor’s defence sews doubt into the mind like an old lady knitting a jumper and he took it 11-8. Taylor was always ahead in the second end, and with some cracking rallies along the way he took it again 11-8 to establish a 2-0 lead over Seddon. Taylor could no doubt taste the title on his tongue by this point. At the start of the third end, astonishingly we saw our first broken ball of the evening – the first one had put up with quite a lot! Seddon trailed 6-8 and you felt that he was still in contention if he could pull something out the bag, but agonizingly he fault served into the net, and from this point Taylor stayed in control to take his third Burnham Men’s Singles title 11-8, 11-8, 11-6. Umpired by Peter Ballard, full match: https://www.facebook.com/BurnhamTT/videos/1605561669498071/] 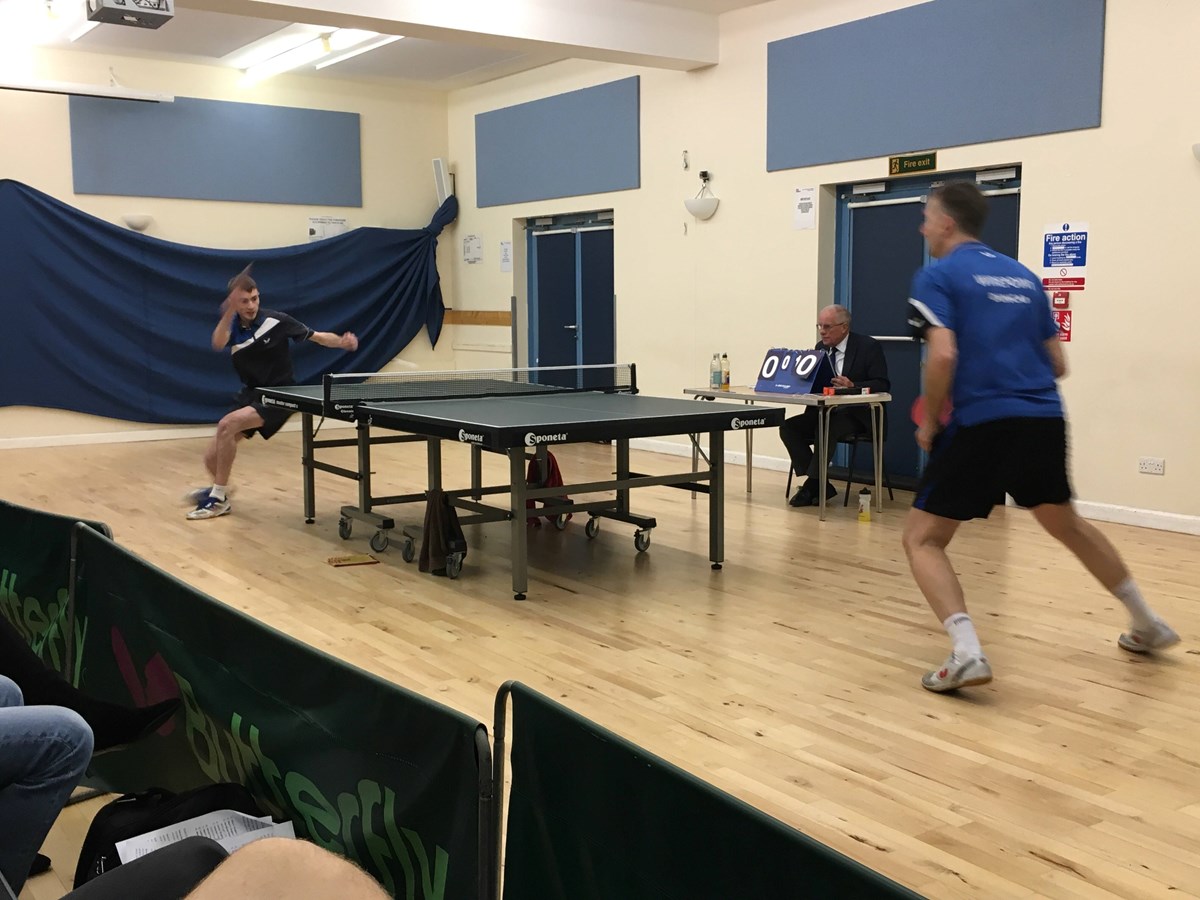 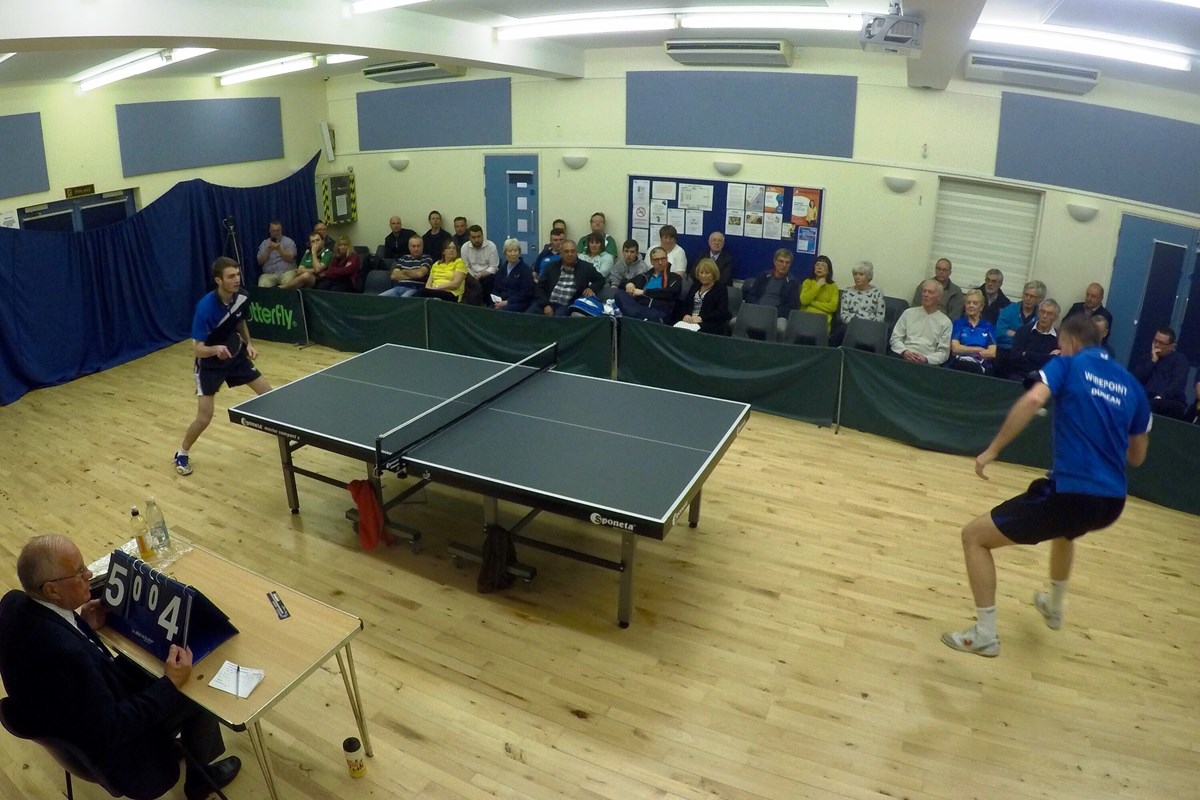