Lots of hard fought matches this week in the Burnham & District Table Tennis League.  None more so than in the top of the table clash in Division 3 between leaders Stow Maries D and the chasing Woodham D.   Half of the matches went to 5 sets and if I tell you that were all won by Stow that probably gives away the overall result.  Stow’s Steve Martin and Tim Pulham both recorded hat-tricks on the night in their 8-2 triumph, although Martin required the full 15 matches to achieve this goal.   Martin was 10-6 down in the 4th set to Woodham’s ever improving Joe Cooke and someone recovered those 4 match points and then some more to level 16-14 before clinching the match in the 5th.  Poor Cooke had an animated evening as he also had a confident start against Pulham, pulling ahead 2-0 before the bandana worked its magic and Pulham rather cruelly took the next 3 sets to crush the dreams of young Cooke.  This result has provided a decent cushion for the Stow team at the top of the league ladder.  Blackwater D and C both leapfrogged Woodham D with large wins of their own.  The Blackwater D trio of Norman Hayes, Dave Benstead and Chris Rolison recorded an impeccable 10-0 victory over Burnham A, whilst Blackwater C ran out 8-2 winners against St Lawrence B with another hat-trick for Rolison.  Blackwater’s Peter Davenport was also unbeaten only dropping a single set all evening, and Kath Little chipped in with two solid points of her own.  Maldon E had John Leavett to thank for their 5-5 draw with Blackwater E as he won all his singles and partnered up with Brian Dixon for the doubles.  For Blackwater the defensive Ron Tam and Peter Hughes both won 2 out of their 3 singles only losing out to the unplayable Leavett. 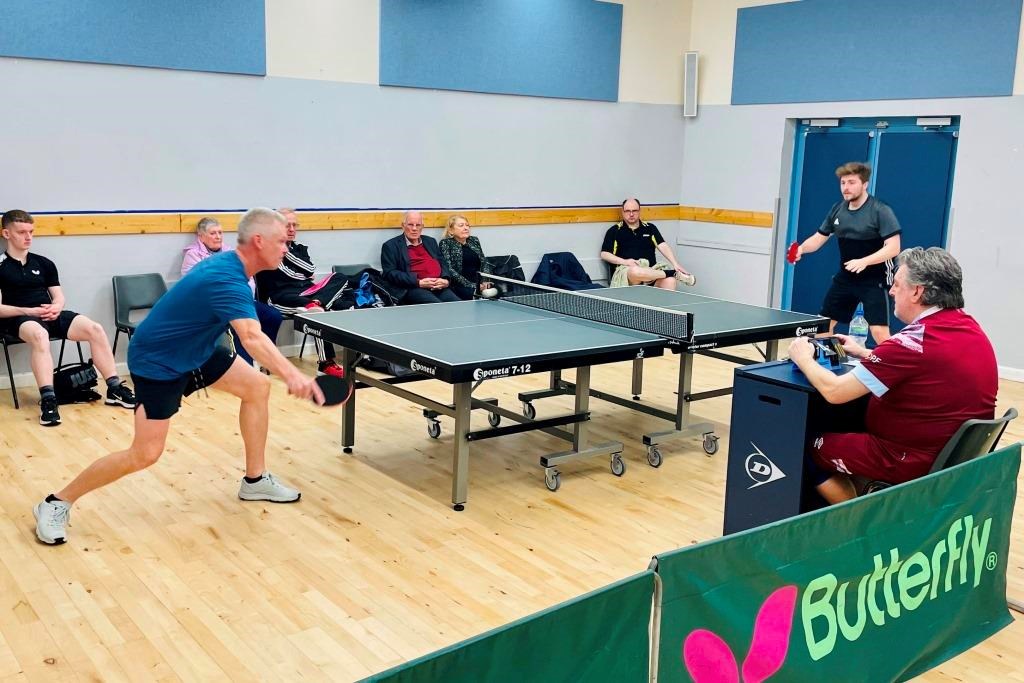 In Division 1 the Fambridge Express has turned into a bullet train as they recorded their fifth whitewash of the season.  This week’s unwitting victims were a fully loaded Maldon A.   Maldon’s Steve Whiteley got the closest to any of the Fambridge Galacticos as he took Gurj Bhambra to 5 sets having cheekily taken a 2-1 lead!  Bhambra and his team-mates, John Poysden and Keith Adams all racked up hat-tricks, and for Poysden a personal milestone as he hit his tenth unbeaten evening of the season.  Cold Norton C took a well earned 8-2 victory over Stow Maries A including winning 4 of the 5 matches that went to 5 sets.  Arron Chandler blasted his way to 3 wins and the player of the match award, and he was well supported by Dick Wyman and Kim Shead who both notched 2 wins, with Shead just losing out 14-16 in the fifth set to Gary Brignall.  Shead had come from behind in both his other matches to win in 5 so it seemed only fair to let Stow win one of them!  Not a great week for the Woodham teams as they both lost out to Mapledene.  Woodham A succumbed 6-4 to Mapledene B who had Keith Willett in tremendous form.  Willett only dropped a solitary set all evening for an awesome hat-trick.  It was also a magical night for Mapledene Captain Anthon Ranjit-Singh who finally recorded a win for the B Team after 30 matches this season.   Woodham B hosted Mapledene A and were blasted 9-1 for their troubles.  There were a couple of exceptional encounters though that top and tailed this match.  The opening foray saw Woodham’s Sanjay Saptarshi take on former Singles champion Reece Seddon.  Seddon played the role of the irresistible force with smash after smash after smash, whilst Saptarshi took on the guise of the immoveable object as he blocked everything that came his way no matter what the speed or angle.  45 minutes of electrifying ping pong came down to a fifth and final set with both players perspiring and panting.  Seddon was the more controlled in this final set and eventually won out 11-8.  Going into the final match of the night Mapledene’s Steve Muth was clearly up for it as he set out to avenge a previous defeat from Saptarshi.  Right from the off Muth’s determination and concentration were evident as he cajoled as much concentration and skill as he could out of himself.   Muth took a quick 2-0 lead but Saptarshi fought back and took the 3rd set – how would this play on Muth’s confidence?  The 4th set was cagey with both players looking a bit nervous and mistakes were happening – at 10-10 the crowd were hoping for a 5th set decider but Muth was having none of it and wrapped things up 12-10 to take his hat-trick and the deserved man-of-the-match champagne. 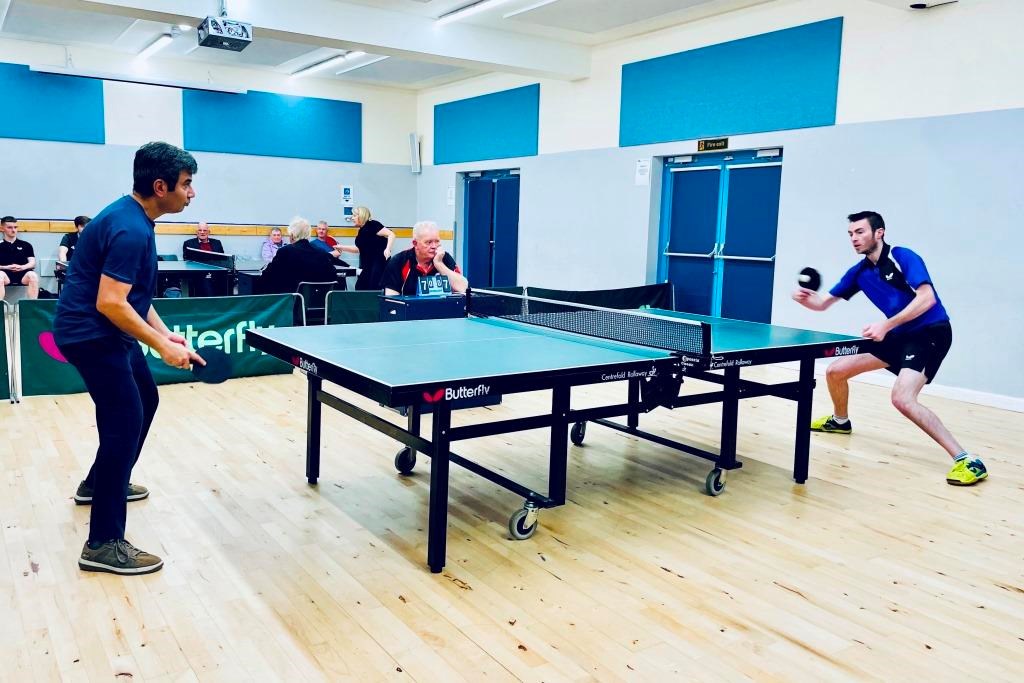 There was also a top of the table clash in Division 2 this week as Mapledene C avenged their only defeat of the season with a close 6-4 win over Maldon B.  No player went home empty-handed as the wins were shared around evenly.  For Mapledene C David Jacob and Tony Jacks had two wins a piece and this was matched by Maldon’s Colin Napper.  Cold Norton D and Blackwater A played out a marathon 5-5 draw with 6 matches going all the way to 5 sets.  Luckily breakfast was being served at Latchingdon Manor just as the final game concluded.  Cold Norton’s Peter Lucraft was the only Hat-trick merchant but rather selfishly he did take all 15 sets to achieve this.  For Blackwater, dodgy bat peddlers Alan Scammell and Big Merv Perriman both won 2 singles each to keep their team in the mix.  Woodham C laid down an unexpected high scoring win over Stow C.  Woodham were very comfortable 9-1 victors with both Joerg Poeschus and David Meah unbeaten in both singles and doubles.  Captain Alan Dadswell just missed out as he was defeated by Stow’s Peter Chastin for Stow’s sole and lonely point.  The final encounter was a mis-match in quality as St Lawrence A were again defeated 10-0.  This time the slayers were the very strong Stow Maries B trio of Nicky Reece-Ford, Peter Hance and Dave Marsh.  Marsh needed all his staying power for his hat-trick as he went to 5 sets with Steve King and Jason Bush, and 4 sets with Karen Braney.  The King v Marsh duel was a proper roller-coaster (5-11, 14-12, 4-11, 20-18, 10-12) and both players had match points but it was the experienced Marsh that came through by the skin of his teeth. 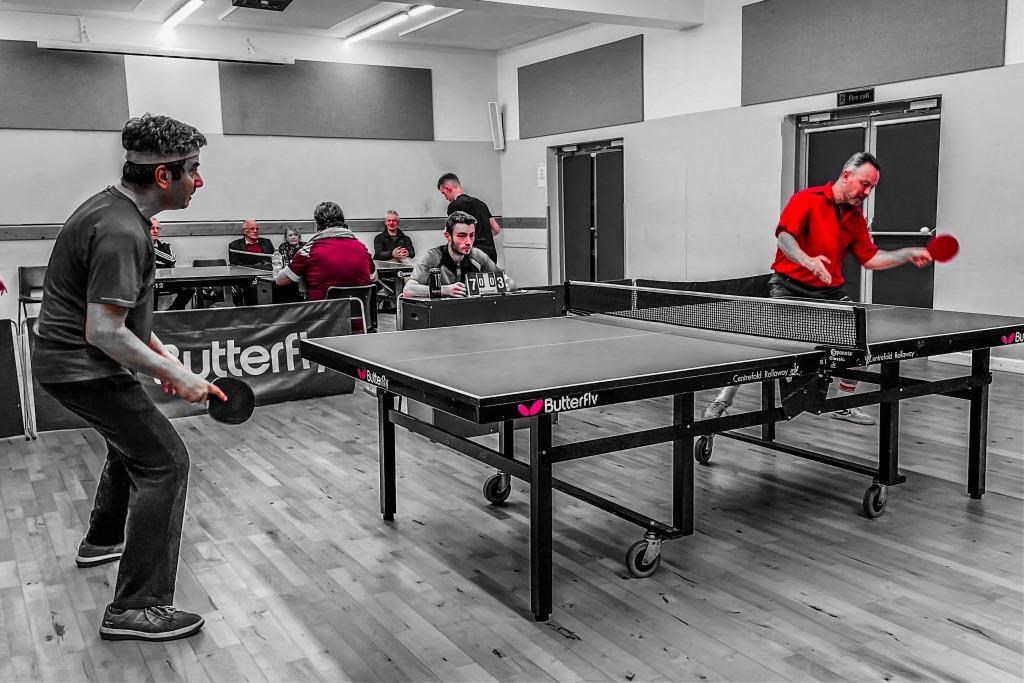