Championships Review Sunday – The Day the Seeds Died, the Sequel: “Fate of the Eight”

We’re not quite there yet with Finals Night still to come on Thursday, but the majority of table tennis – 400 matches or so – has been completed and it was a rather decent tournament. In fact, probably the most shocking tournament in terms of results out of any Essex local league tournament in recent memory. Where to begin…

The Fate of the Eight (Men’s Seeds)

No. 1 Duncan Taylor: Group 1 went very much to form, top seed and title holder Duncan Taylor fairly untroubled and defeating group runner-up Matt Stringer 9, 4, 8 (is this the last we’ll see of Stringer? I’ll save you the suspense… no). Unfortunately for Taylor though his winning of the group pitted him against a runner-up of another group, and that man was fellow defender Eric Green. Green has been after the Taylor scalp for some time and I suspect private investigators and even hitmen have been involved. Green did not have to wait any longer, as he achieved a monumental win 6, -8, 8, 11. See you later, Mr Taylor.

No. 2 Keith Adams: Group 2 did not go to form, however many of us won’t be too shocked to hear – given recent results – that the unseeded Dan Young defeated Adams 5, 9, 11, a fine win. This turn of events pitted Adams against the winner of another group, and that man was fierce topspinner no. 4 seed Kevin Read. The match was a cracker, Read beating Adams -12, 7, 4, -8, 8. Adios, Mr Adams.

No. 3 Gary Young: In Group 3 Young avenged a recent league defeat by beating Ciaran Whelan 6, 7, 9, displaying his tournament form. Whelan came runner-up and played very well in fact, beating the tricky Barrie Delf 3-0 and also the Sanjay Saptarshi Sensation 8, 6, -4, 10. All according to plan right? No, that Stringer we talked about earlier, beat Young over 5 ends. Dosvidaniya, Mr Young.

No. 4 Kevin Read: Well, we know he made it through his group, but he had to fight back from 2-0 down against eventual runner-up Chris Ballard! Read eventually prevailed -6, -8, 8, 6, 3. Then Read beat Adams, so what happened? Sam Lowman happened. Not content with his Mixed Open title, Lowman took “good shot selection” to the next level as he defeated Read 10, 7, 11. I don’t think it is the first time Lowman has beaten Read, but still… what a win. Ciao, Mr Read.

No. 6 Glenn Johnson: Another group of death! Jon Stokes, Eric Green, Victor Chan, don’t even get me started. Throw a chicken a rabid squirrel into the mix. Stokes beats Chan 11-7 in the fifth! Johnson beats Green 13-11 in the fifth! Johnson goes through as winner, Green as runner-up. In the knockout, Johnson beats Tim Pang 4, 6, 6, simples. Matt Stringer, after defeating Gary Young, beats Johnson 10, -9, 7, -3, 7. Jog on, Mr Johnson.

So what else happened… Bhambra beat Ciaran Whelan -6, 6, 10, 8, and then Eric Green in the Quarter-Final 10, 7, 8, 4 (does he just drop the first end on purpose?) Oh yes, and Dan Young beat Chris Ballard 11-9 in the fourth before beating Sweeny, and Sam Lowman beat Whiteley 3-0 before beating Read. Some notable results in the preliminary groups: Eamonn Hall beating Dave Hancox in four ends, Allan Steel avenging his Restricted Singles Final defeat to Roger Hance in four ends, Div 3 player Alan Scammell beating Div 1 player Anton Ranjit-Singh 3-0, and another Div 3 player Sanjay (Sensation) Saptarshi beating another Div 1 player Colin Napper, wasn’t much of a game, -13, 6, -15, 6, 3 (put some effort it in boys). Should these guys move on from Div 3? Errr… yes. Has it ever happened that all of the top 8 seeds failed to make it to Finals Night? Who knows. Someone does, probably. Something I’m quite sure of: it’s the youngest total age of Men’s Singles Semi-Finalists in decades with only one veteran involved (damn it, Gurj!) Finals Night Semi-Finals line up: Bhambra v Lowman and Stringer v Young, bring it on.

I’ll now smash out some of the shorter events. Ladies Doubles, disappointing entry, but we had a Final! Dawn Baldry/Andrea Alleyne defeated Angela Clarke/Kath Little 4, 7, 8 to take the title. In the Ladies Singles, no.1 seed and holder will face her doubles partner Alleyne on Finals Night. The Mixed Doubles, now things get interesting! In two round-robin groups favourites Dawn Baldry/Ciaran Whelan progressed as winners from one while Andrea Alleyne/Duncan Taylor progressed as winners from the other; Alleyne/Taylor fought well to defeat Diane King/Lee McHugh 10, -4, 10, 10. The runner-ups progressed too though to the Semi-Finals… in one of the biggest upsets of the weekend King/McHugh beat Baldry/Whelan 10, 9, -5, -3, 12. Alleyne/Taylor and King/McHugh will face each other on Finals Night.

In the Men’s Doubles peoples’ legs are starting to get sore and Jan’s hotdog buns are depleting. Alan Scammell/Louis Gunn score a fine win over Dave Hancox/Sanjay Saptarshi 11-7 in the fifth. Jon Stokes/Steve Whiteley impressively despatch Gurjit Bhambra/Steve Maltby 3-0. Eric Green/Babul McLeod beat a pair whom I rate very much, Ciaran Whelan/Colin Napper, also 3-0. An absolutely cracking round one match saw Charles Sweeny/Reece Seddon defeat Dan Young/Glenn Johnson 9, -15, 9, 8. Dan Piggott/Lee McHugh did well to beat Anton Ranjit-Singh/Bill Smith 3-0 before being downed 3-0 themselves by Sweeny/Seddon in the next round. In an all-Cold Norton fixture Matt Stringer/Chris Ballard beat Sam Lowman/Dan Anderson 11-7 in the fifth. In The Semi-Finals Keith Adams/Gary Young booked their Finals Night place with an impressive 3-0 win over Jon Stokes/Steve Whiteley while Kevin Read/Mark Stones had it tougher and they fought hard to come back from 2-0 down to beat Sweeny/Seddon -9, -7, 9, 11, 4.

Right. Oldies. I mean Vets. In the Veteran’s Singles, straight knockout ensued and in round one Victor Chan scored a fine win, 12-10 in the fifth, over Dawn Baldry. Eamonn Hall caught Gary Young by surprise, winning 11-7 in the first end, why didn’t you win the rest Eamonn? Babul McLeod absolutely pummelled a, let’s face it, on form Steve Whiteley, 7, 6, 2, a match in which McLeod unfortunately took an injury. Anton Ranjit-Singh impressively despatched the Sanjay Sensation 8, 7, 6. Rod MacLennan, sporting his Hawaiian or are-they-pyjamas shorts, scored a fine 14-12 in the fifth win over Bill Smith. Tim Huxtable beat Keith Adams. On the coin toss. Ok now we get to some “upsets”, in round two Barrie Delf did well to beat Eric Green coming back from 2-0 down, and Steve Maltby did amazingly well to push Gary Young all the way before succumbing 11-8 in the fifth, Kevin Read displayed domination to beat Gurjit Bhambra 7, -8, 1, 5, Jon Stokes had a blinder to beat Mark Stones 11-9 in the fifth, and perhaps most impressively of all Sanjay Saptarshi got the better of Babul McLeod over four ends. In the Semi-Finals there were two cracking matches; Duncan Taylor beat Gary Young 11, -4, 8, 6 and Keith Adams avenged his Men’s Singles defeat to Kevin Read by this time winning 7, 8, -9, -9, 8. In the Veteran’s Doubles, nothing much of note happened, not to say there weren’t some cracking matches. Kevin Read/Mark Stones impressively despatched Jon Stokes/Steve Whitley over four ends, while Gurjit Bhambra/Glenn Johnson beat Barrie Delf/Steve Maltby 11-7 in the fifth. The Semi-Finals saw Keith Adams/Gary Young beat Bhambra/Johnson 3-0 while Read/Stones beat Eric Green/Duncan Taylor 16, 5, -7, 10. In the Final Read/Stones impressively beat Adams/Young -3, 8, 9, -8, 14, I say impressively as I think Adams and Young have more experience playing together so would have given them the edge. In the Over 60s Singles the Super Veterans continue to prove that table tennis is a sport for life with their fine physique and quick footwork on display. Again, no real upsets until the Semi-Final when Glenn Johnson impressively beat Steve Whiteley 5, 5, 7, and then in the Final Eric Green defeated Johnson 8, -7, 3, 5.

Oh, I forgot about the Plate! No, not the one I didn’t wash up this morning. The Consolation Singles for those knocked out of their groups. A new event instated three years ago, it really is a great one which ends up involving a strong field of players and I see it as another chapter of the Mixed Open. This time it was the Daniel Piggott story really, as he pulled off a series of phenomenal wins. Reece Seddon? Check. Bill Smith? Check. Jon Stokes? Check. Dan Anderson? Check. In the end though, Piggott’s own story didn’t end happily for him as 8 ft Barrie Delf blocked his socks off to defeat Piggott in the final 7, 6, 8, well done the Delf!

Alan Dadswell – for doing nearly everything, taking in entry forms for months, preparing all the draw sheets and match tickets, scheduling, being on the control table the whole weekend

Val Board – running the raffle taking in £275

Sorry if I’ve forgotten anyone.

See you at Finals Night! 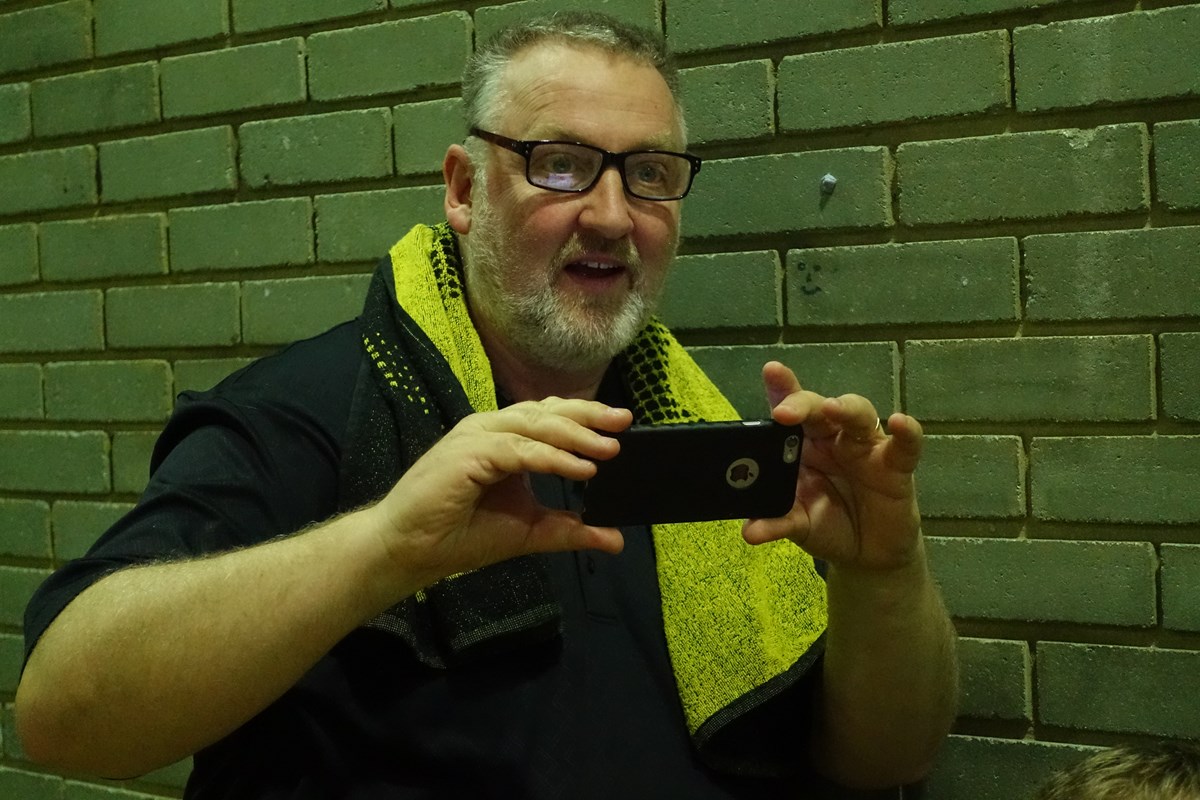