In the first week back after the festive break it is clear that some teams had over indulged more than others as there were a few very one-sided affairs. The most straightforward was a very impressive 9-0 win for Rawreth A over Stanford-le-Hope where the Rawreth side of Kevin Read, Steve Tilson and Zayd Mauthoor managed to record that rarity of an evening where they didn’t drop a single set.

The second 9-0 result saw Hullbridge A overcome Hadleigh Form although Hadleigh’s Dave Bassett and Anthon Ranjit-Singh did manage to push their opponents to 5 ends on three occasions. The 9-0 result not expected was Thorpe Bay A’s whitewash of Rayleigh Mill. The Millers not helped by only fielding two players but nonetheless they could have expected their two remaining players Peter Radford and Duncan Taylor to get them on the scoreboard but it wasn’t to be. Paul Sayer in particular was in great form backed up by good performances by Mark Stones and Alex Abbott saw that run out easy winners although again there were quite a few close games that went to a 5th end but that all went the same way.

Another big margin of victory, 8-1 this time, was recorded by Thorpe Bay B over Hockley A. Liam Squirrell and Kieran Skeggs (in photo below) going unbeaten and Gurj Bhambra only being denied his hattrick by Chris Ballard. 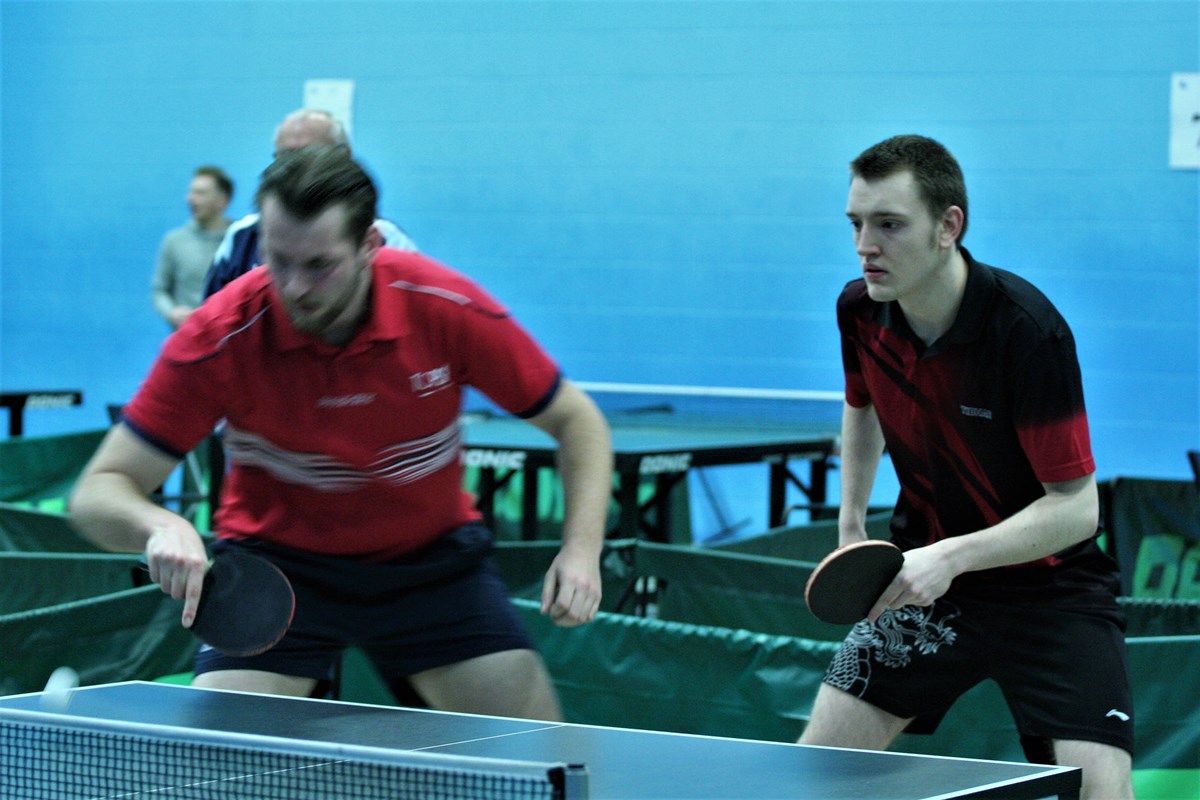 The one really tight game in the first set of matches of 2019 saw a 5-4 win for Brand Identity A over Warehouse B. Brand Identity who were without talisman Chris Jacob who we wish well following his transfer down to sunny Devon sneaked past their opponents with three wins from Simon Jacob and two wins from Barrie Delf. Harry Small, Mark Rudland and Martin West all recording wins for the four Warehouse points.
Duncan Taylor

One re-arranged game played two weeks ago was the Lentern A against Hockley C game. This ended in a comprehensive 9-0 victory for Lentern. Martin Archie, Peter Cranmer and John Lott, returning for his first game this year all won their games and confirmed their position at the top of the table. David Chenery, Dan Patynski and Callum Turner were unable to find any way past the stubborn defense of the Lentern team leaving them 2nd from bottom in the league.

In the league this week, the top two teams clashed in a make or break match. In a long drawn out match, Hockley B beat Lentern A by 7-2 to keep Lentern to within 10 points at the top of the table. Hockley’s win was centered on maximums by Dave Colwill and Alex Barnetson with Stuart Adshead adding the final point. Elaine Sayer and Peter Cranmer scored the points for Lentern but with 3 matches going to 5 sets the result could have swung either way.

Invicta A are keeping up the pressure on the top two but are 7 points adrift from 2nd place. A good 7-2 win over Hullbridge E this week with Mike Piper and Steve Marr scoring maximums, but Tony Ayliffe, probably still a bit full from Xmas turkey, only able to add one point. Harrison Sadler and James Goddard were the ones who scored for the Hullbridge team who will still need to keep an eye on teams below them to not get dragged into the relegation dogfight.

Hadleigh Forum B then bring up 4th place but have been dropping off the pace a little since before xmas. This week a 7-2 win over bottom club Rawreth D, who were only able to field two players added to their points. Tony Jacks was the only unbeaten forum player with Mick Tappandend and Dave Woolmer adding a point each. Sam Thompson played well scoring 2 for the Rawreth team but are some points adrift at the bottom.

Hullbridge D started the New Year well with a 5-4 win over Customs A. Andy Seaman and Mike Johnston scored two each and Rod Maclennan added the final point. Roy Thomas scored a hat trick for Customs but only Dale Gutteridge was able to add a further point. Bothe teams are comfortably in mid-table.

Brand Identity B had a mixed night losing 6-3 to Hockley C. In a re-jigged team, Barrie Delf playing his last game for the B’s and Richard Riebold playing up for the first time from the C team. In the end, Hockley proved too strong with Keith Abbot, Callum Turner and Dan Patynski all scoring two points each. Barrie Delf scored all the point for the Brand Team to leave them comfortably in mid-table.

Canvey A brought an end to the resurgence of RESSC with a solid 6-3 win. Ray Wilson scored 3 with Andy Murray (who is not the retiring one!!) scoring two and Terry Giddens with one to make up the Canvey points. Ron Coutts played well to score two for RESSC, with Mike Worship adding one. New signing, youngster, Dave Norris was unable to open his account in Southend.

Finally, Rawreth C played well to turn in a 6-3 result against Lentern B. Gary Hartgrove played well to take all 3 games with Chris Aukett taking two and Colin Clements adding one. For Lentern, Gus Heath scored two and Wayne Farmer one to push both these teams further away from relegation.
Barrie Delf

A debut this week for yet another of the Nunn clan. Young Ethan made his first appearance for Rawreth’s E team away to Warehouse C at the ripe old age of thirteen. Ethan did very well without troubling the scorer. No doubt this is the first step of a long road to share in the success of others in his family. We wish him all the best. Saurabh Mohal was again the star for the home side, with an unbeaten evening. He was well supported with a pair each from Conrad Gomes and Jonathan Allen. Jan Thorpe and Mitchell Nunn shared the away side’s points in a 7 – 2 victory for Warehouse.

It wasn’t a very good week for the all the Rawreth teams in this division – all three ended up without a victory. Rawreth G came closest to a win, going down 4 – 5 at home to Hockley D. The visitors’ two Davids - Cross and Chenery - each won two and Neal Klyman’s solitary success ensured a victory. Andy Deadman and George Davis each won two for the home side.

The scale of Rawreth F’s defeat away to Stanford le Hope B was as bad as it can get. Maximums from Brian Spencer, Adrian Armstrong and Chris Crooks resulted in a 9 – 0 drubbing the must have made the long journey seem far from worth doing.

Stanford’s 9 - 0 score line was mirrored by Wakering as they ‘entertained’ Brand Identity C. Wakering’s usual gang of Stewart Mills and Zac and Paul England were all too good for their visitors. The results mean no change near the top of the table, where Stanford remain second and Wakering are six points behind in third.

The battle of the two Canvey sides ended with an 8 -1 win for the B team. Games were a lot closer than the result suggests, and it was a little hard on the C team, since they have been doing sterling work playing up for the B team on numerous occasions in 2018 when personnel were unavailable. Maximums came from Des Duffield and Lee McGonagle, with two wins from Tony Westwell. Tony Molisso got the C team’s consolation point.

A Neil Daines hat trick gave visitors Invicta B a 6 - 3 away win at Runnymede. David Barnes won two and Barrie Murphy one, in a team effort. Tony Coeshall got two for the home side and Jim Nariel one.

Leaders Hadleigh Forum C moved serenely on towards the title with an 8 -1 demolition of Hullbridge F. Toby Zeffe saved Hullbridge’s blushes, whilst Joe Buscombe and Ellena Hart put up a good show. However, three each from Paul Fawell and Mark Everard and two from Satwant Gill made the job comfortable.David Barnes

After the first game back from the winter break there is no change at the top of Division 3 with the top three teams all winning albeit Customs B lead by four points rather than five.

On paper Customs had probably the hardest match of the three against Hullbridge G,  but a man of the match performance from Amar Al-Soufi formed the backbone for a 6-3 victory. It was a close match with three games going to five sets and Hullbridge actually led 2-0 before the Taxmen rattled off six wins on the trot to set up the win. Richard Kidd won two and Dean Johnson one. Andy Roff won two for Hullbridge and Lindsey Johnson-Farge one.

Second placed Invicta C overcame the young Hullbridge H team 7-2 with another MOTM performance from Jon Gould who won his three matches and is currently enjoying his best ever season in the Winter League. John Golding and Dave Youngman both weighed in with a brace apiece whilst Josh Jones won both points for Hullbridge and was only denied his hat trick by John Golding who came back from 2-1 down to record a five set victory.

Third paced Hockley E also had to overcome another young team running out 7-2 winners against Rawreth H. The experience of Phil Pond saw him record a hat trick but  he had to fight hard against Ethan Silvester coming back from 2-1 down to win in five sets. Ben Cook and Aaryan Vatsa both won two  games for Hockley whilst Ethan won his other two games for Hullbridge. Invicta and Hockley both have the same number of points but Invicta have won one more game than their rivals.

There were lots of close games in the match between Stanford D and Hockley G with one match going to five sets and five going to four sets. Apart from Paul ‘Tubby’ Henlen though, who won all his games for Hockley, Stanford always held the upper hand and ran out 6-3 winners. Mark Farley, Sami Hughes and Dan Harris all picked up two wins whilst John George and Keith Denyer returned home pointless for Hockley. The one five set match was between Dan and Tubby with Dan levelling the match at 2-2 after being 2-1 down but then seeing Tubby hang on to his unbeaten record for the season winning the fifth set 11-6.

Stanford C were the big movers of the week their 9-0 win over Hockley F moving them up to fifth place one point behind their D team. Peter Moxham, Mark Downey and Martin Winter were the hat trick heroes but Peter had to work a little harder than the others overcoming both Graham Gregory and Alwine Jarvis in five sets. Hockley F stay bottom and are beginning to look a little adrift from the rest of the division.

Player of the Week – Paul Henlen

Team of the Week – Customs B