This is a Handicap event with capacity for a maximum of 40 players - first come, first served.

Entries open on Monday 25th November for this season's tournament which will take place on Sunday 5th January 2020 at Kingfisher TTC.

To enter you will need to create an account on Tournament Software or login to your existing account there and provide your name, email address, phone number, date of birth, Club name and TTE membership number.

By entering this event you are agreeing to Tournament Regulations

If you have any problem entering, please contact the organiser.

The draw will made made on 2nd January, after which an email will be sent to all entrants informing them of their reporting time.

It was won by Mo Cook who beat Rajant Sawant in the final. (more details to follow)

See all results via - TOURNAMENT SOFTWARE

Many thanks to Wendy Porter who arranged and ran the tournament on the day.

The 2017/18 tournament was held on Sunday 7th January 2018 at Kingfisher Table Tennis Club.

The full quota of 40 players took part in this season's tournament which comprised 8 groups each with 5 players.  Four groups were completed in the morning, four more later in the afternoon and the 8 group winners then competed in the quarter-finals.

It was nice to see such a mix of players from the youngest player (Om Gore who is only 8 years old) to some of our older players and including new players (seniors and juniors) as well as our old faithfuls across all divisions in our league (1-5 & Youth).  Gwynne Penny and Rishika Desai flew the flag for the ladies - lets see if we can get some more next year.

The day saw some fantastic matches, lots of contests going to 3 sets and lots of deuces, showing good handicaps for the most part. There were a few that were rather generous, although I'm sure these will be rectified next year.

Many of the group winners were not decided until the final set of the group. And with so many close games, it was very entertaining and exciting to watch.

Top players like Daniel Moses, Joe Barraclough, Lee Calcutt and Julian Telford, were made to work hard for their points and though giving massive starts (some the maximum of 18)  and some seeming impossible feats, they showed themselves to be great role models and ambassadors of our sport.

I received many comments of how impressive the conduct and ability of the juniors was from both players and spectators alike. Well done to you all.

Congratulations to Andy Wang who beat Clive Gold 21-13, 21-2 in the final to become the 2018 Individual Handicap Champion. 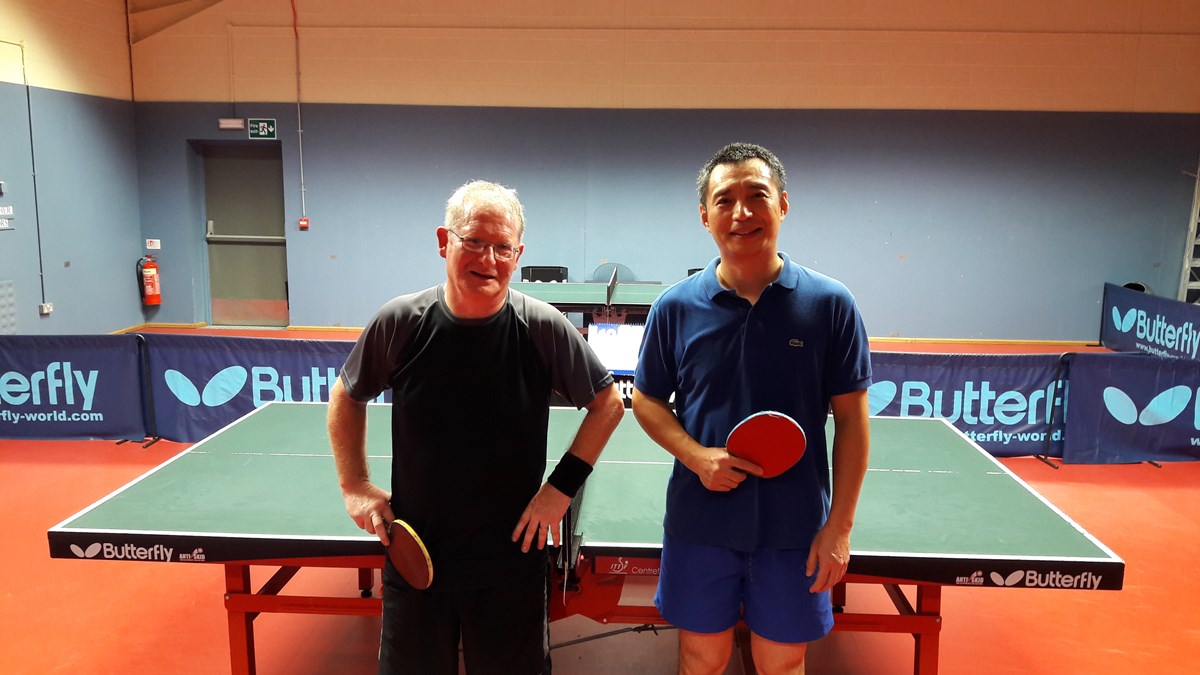 Thanks to Allan Bruton of Kingfisher TTC for opening up early and ensuring everything was clean and ready for the day, then for coming back near the end to clear away again.

Thanks to all the players for keeping the day running smoothly. It made for a very enjoyable day for me, and a good start to 2018.

I hope everyone enjoyed themselves and I hope to many of you again at next year's tournament.

The 2016/17 tournament was held on Saturday 21st January 2017 at the Kingfisher Table Tennis Club.

The event started 30 minutes late, due to really bad, icy conditions that morning and to allow for latecomers who hadn't paid attention to the time they were told to report.  Some didn't as they thought they didn't need to arrive until the time of their first match. (If everyone had done this, there would have been no-one to umpire the first set of matches!)

One reserve stepped in to replace a late withdrawal and another arrived at very late notice to take the place of a "no show", so the full complement of 40 players enjoyed a full day's play through to the presentation at 5:40pm.

The 8 round-robin groups each produced a clear winner who went through to the knock-out quarter-finals. After some closely contested semi-finals the final was between two OLOP players, Felix Thomis (of Division 1) and Tamir Slobodskoy (of Division 4), but it was the lower ranked player who ran out winner.

The Tournament was run using a new piece of software "Tournament Planner" and it's online equivalent "Tournament Software" which enabled the match results to be published online throughout the day as the tournament progressed.  This allowed many players to use their smartphones to check the results. group standings and the knock-out draws as the day went on.

If anyone who took part has any comments on the tournament or how it was run, please email rdtta.uk@gmail.com

Many thanks to Wendy Porter who ran the event on the day and managed to get her head around using the new software.

We have 12 Clubs with 50 teams playing in 4 senior divisions, plus a youth division, with around 300 playing members in total.

If you live in the Reading area and would like to take up or return to the sport, why not get in contact and join a Club near you?